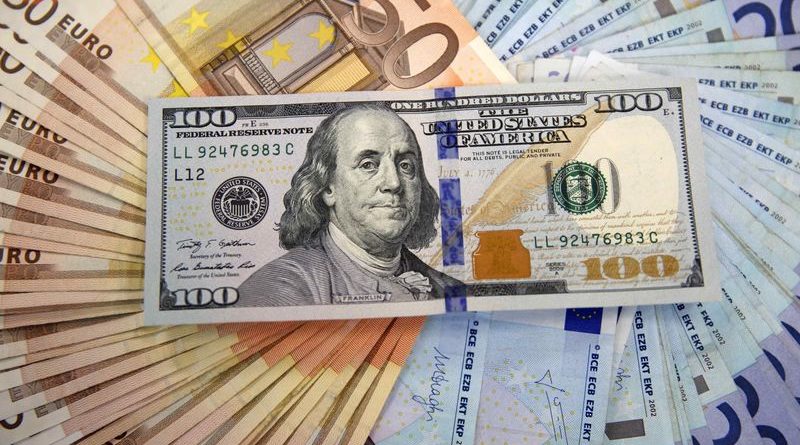 The dollar was on the defensive against its rivals on Wednesday as traders looked to Federal Reserve Chairman Jerome Powell’s speech amid rising speculation the United States could one day adopt negative interest rates.
The New Zealand dollar fell to this week’s low after the country’s central bank expanded its asset purchase program and indicated readiness to take further steps — including negative interest rates.

The dollar traded at 106.89 yen, down 0.2% after reaching a peak of 107.76 on Tuesday, its highest since April 24. The euro changed hands at $1.0876, up 0.3% against the U.S. currency.
U.S. President Donald Trump on Tuesday again pushed the Federal Reserve to adopt negative interest rates, a hot topic in financial markets since last week when U.S. money market instruments started to price in a chance of negative rates.
Data showed on Tuesday U.S. consumer prices dropped 0.8% in April, the biggest since the Great Recession, raising the spectre of deflation as the economy sinks deeper into recession and fueling the debate about policy responses.
“I would advise against negative rates. Japan has done that but the perception here is that it wasn’t so good,” said Hiroyuki Ueno, senior strategist at Sumitomo Mitsui Trust Asset Management.
“But what’s worrying is that Trump is now talking about them. Looking at past examples, the Fed has eventually done what Trump wanted quite often.”

Powell will be speaking on current economic issues in a webcast hosted by the Peterson Institute for International Economics at 9:00 a.m. (1300 GMT).
Up until now, Fed officials have said they do not see a need to cut interest rates below zero and some market players expect Powell to stick to that script.
“If markets price in U.S. negative rates further, the Fed will need much more communication to rewind such market moves at a greater cost,” said Kazushige Kaida, head of FX sales at State Street Bank and Trust’s Tokyo Branch.
“I think his message is more likely to be something in the line that the Fed is focusing its efforts more on credit easing than negative rates.”
Still, investors think that will become an option especially if the coronavirus outbreak leads to further deterioration in the U.S. economy.
Top U.S. infectious disease advisor Anthony Fauci on Tuesday warned Congress that a premature lifting of lockdowns could lead to additional outbreaks of the deadly coronavirus.
His comments cast a shadow on optimism in financial markets in recent weeks that the worst period of the epidemic is over and the economy can only get better.
U.S. stock prices also slid, led by high-flying technology shares, adding to the cautious mood on the economic outlook.
That put a brake on a rally in risk-sensitive currencies such as the Australian dollar.
The Australian currency last stood at $0.6476, little changed on the day and off Monday’s one-week high of $0.6562.
The New Zealand dollar lost 0.5% to $0.6047, touching its lowest level this week, after the Reserve Bank of New Zealand’s policy announcement. It expanded asset purchase to NZ$60 billion from NZ$33 billion while its policy minutes said negative interest rates are a future policy option.
The British pound stood near its lowest levels in five weeks, pummeled also by continued confusion over government plans to ease lockdown measures, the worst Covid-19 death toll in Europe and revived Brexit risks.
Official data published on Tuesday showed Britain’s death toll from Covid-19 exceeded 40,000 as of early May, having overtaken Italy as the worst affected country in Europe.