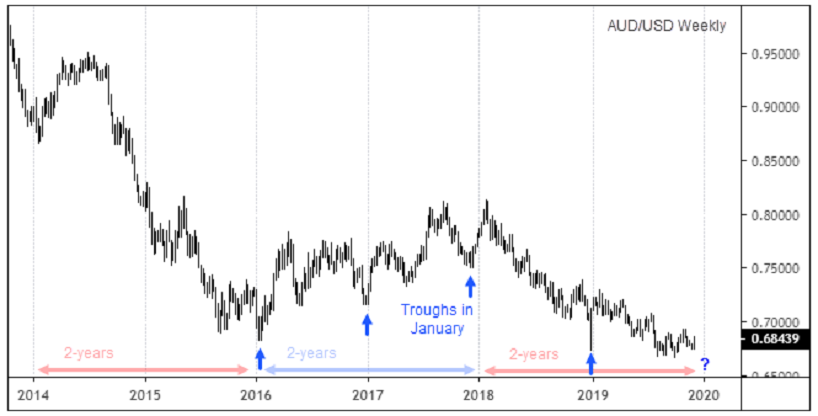 2020 AUD Outlook: Stand Down Contrarians, the RBA Has QE

Shorting AUD/USD is not a new idea. And it’s a strategy that has worked well for bears in the years since the 2011 peak. Yet there’s an interesting cyclical component to the Aussie which should be considered before betting the house on further declines, at least over the near term.

Since January 2014 there have been three prominent, two-year cycles:
2014-2016 (bearish)
2016-2018 (bullish)
2018-2020 (bearish)
A cycle low has occurred around late December / early January every year since 2016. If this pattern were to repeat, we could expect prices to embark upon a 2-year, frustratingly choppy rally starting at the beginning of 2020.
Fundamentally, the Aussie is not on a firm footing heading into 2020

However, simply being long AUD due to a cycle makes no sense if the incoming data and price action suggests momentum may not turn higher.
Despite a relatively optimistic meeting in November, where the Reserve Bank of Australia (RBA) stuck to its ‘gentle turning point’ mantra, GDP has since missed the mark and retail sales are stagnating at 0% YoY. Given the central bank has suggested that it could cut interest rates twice more if data isn’t on track to hit targets, these weak data points only bring forward the expectation of a cut. Still, if data can hold steady or even surprise to the upside, there’s a chance for AUD to be a very strong performer Q1.