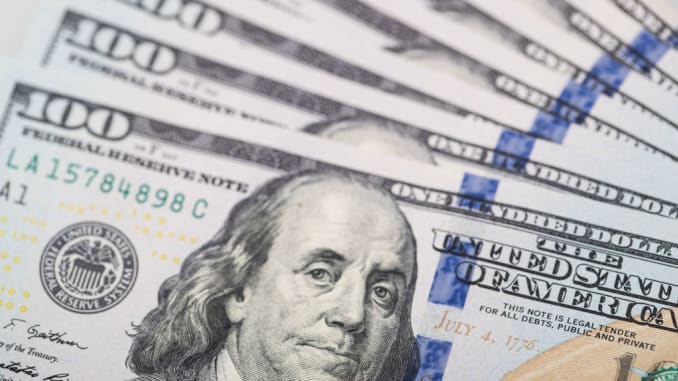 The dollar checked its march higher on Tuesday, as investors sharply raised bets that the growing fallout from the coronavirus outbreak would prompt U.S. interest rate cuts.

That helped to stay a steep slide in Asian currencies that has accompanied the virus’ recent rapid spread beyond China and allowed the pound and euro to drift slightly higher.

The Australian and New Zealand dollars were each about 0.2% stronger against the greenback. The Chinese yuan rose 0.2% and the Korean won mostly recouped heavy losses made on Tuesday.

“Overnight there was a bit of panic over the risk of the virus going global,” said Bank of Singapore analyst Moh Siong Sim. “I think we’re back to assessing how this situation is going to pan out from here…we’re just taking it as it comes.”

Countries around the world are stepping up efforts to prevent a pandemic, as infections tick past 80,000 people, 10 times more cases than SARS.

Almost all of the infections are in China but recent sharp rises in cases in South Korea, Italy and Iran sent markets into a tailspin on Monday.

Amid the turmoil, U.S. bond yields plunged and expectations of rate hikes in the United States have vanished.

Futures for the Federal Reserve funds rate have surged to instead price in a rate cut by June and more than 50 basis points of reductions by year end – pause for thought in the recent rush to buy dollars.

“We’ve seen not only a repricing of Fed expectations, but a bigger re-pricing because the Fed is the one that can actually do something in terms of moving the cash rate,” he said.

Against a basket of currencies the dollar was a touch weaker at 99.321. However, without much good news on the virus, few expect the dollar to give back too much of its recent gains.

Japan’s Prime Minister Shinzo Abe said on Tuesday that clusters of cases had emerged there and that the government would take stronger steps to fight contagion, giving Asian investors another reason to stay cool on the yen.

It traded only modestly stronger at 110.82 per dollar.

China, meanwhile, reported a rise in new coronavirus cases in Hubei province, the epicentre of the outbreak, even though the rest of the country saw a fourth-straight day of declines.

South Korea, which has the most virus cases in Asia outside China, reported 60 new cases on Tuesday, increasing the total number of infected patients there to 893 – leaving few to expect the region’s currencies to do more than hold steady for now.

“Despite the Aussie/dollar holding up overnight, we see the balance of risks to the downside,” ANZ analysts said in a note.

That could add to the dollar’s 5.7% rise against the Aussie so far this year.