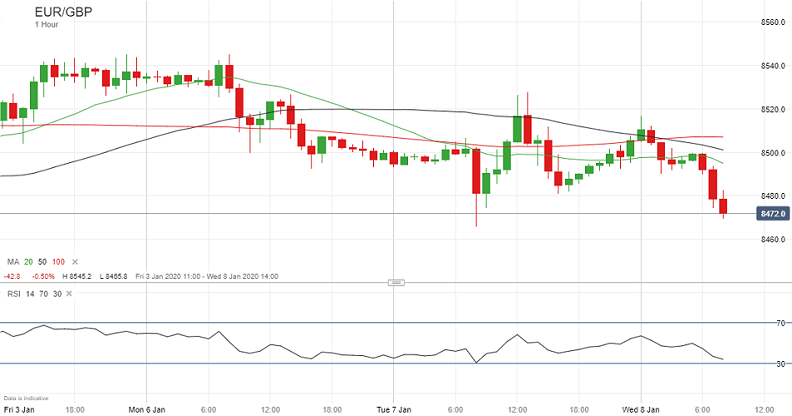 GBP price, Brexit news and analysis:
*Ursula von der Leyen, the new President of the European Commission, is due in London Wednesday to discuss Brexit with UK Prime Minister Boris Johnson.
*The principal bone of contention will likely be the Brexit timetable rather than the terms of any trade deal between the two sides.
*Sterling is holding its ground ahead of any substantive news from the meeting.

EUR/GBP stable as Von der Leyen visits London
European Commission President Ursula von der Leyen is due in London Wednesday to discuss Brexit with UK Prime Minister Boris Johnson amid signs that the two sides remain far apart on the Brexit timetable. Johnson has promised that the “implementation period” will conclude by the end of December while von der Leyen has described that as “extremely challenging”.
For Sterling traders this matters as any signs of disagreement so early in the negotiations could lead to weakness, although both sides are likely to remain diplomatic at this stage. In the meantime, the Pound is holding its ground against the Euro although signs of weakness are beginning to emerge.

Sterling is also stable against the US Dollar, with GBP/USD still driven largely by the conflict between the US and Iran rather than the EU-UK trading relationship post-Brexit, which is scheduled for the end of this month.
Negotiations on a new economic relationship are not expected to begin in earnest until after the UK has left the EU on January 31. Trade talks between the UK and its other major partners like the US could also start then. US President Donald Trump has talked of a “massive” US-UK free trade deal after Brexit, with “the potential to be far bigger and more lucrative than any deal that could be made [by the UK] with the EU.”