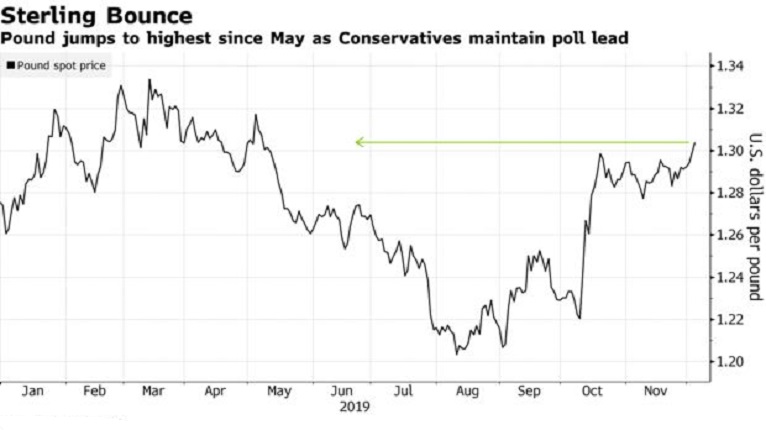 British Pound Touches Highest Since May in Vote for Conservatives

The pound reached the highest level in almost seven months as traders stepped up bets on a win for the Conservatives in next week’s election.

Investors see a Conservative majority on Dec. 12 as the most market-positive outcome, as it would allow Johnson to push his Brexit deal through Parliament in time for next month’s deadline and move on to the next phase of talks with the European Union. Trump’s visit had been seen as a risk for the Conservatives, who face questions over how the National Health Service would fare in any future trade deal with the U.S.

“With just over a week to go, sterling remains highly influenced by the polls day-to-day, but we may also be seeing some relief that Trump did not toss a grenade into the U.K. political system during his remarks,” said Ned Rumpeltin, European head of currency strategy at Toronto-Dominion Bank. “A break above the October high at $1.3013 may open the door for a test of $1.3185.”