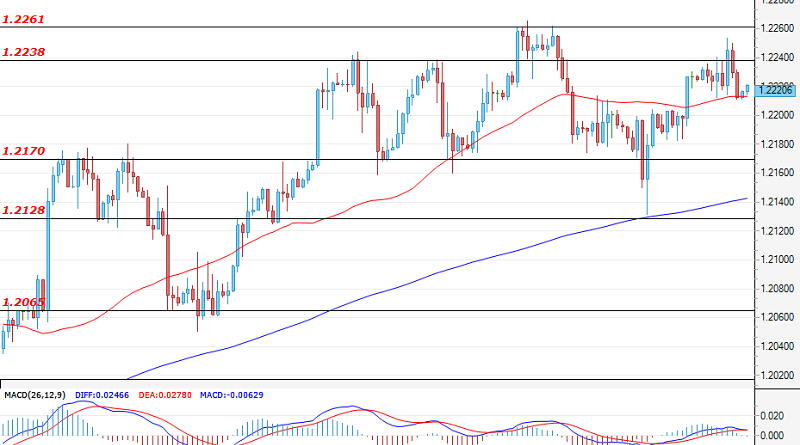 The bulls’ attempt to violate the resistance at 1.2238 during yesterday`s trading session was not successful and the currency pair retreated below the mentioned zone. At the time of writing, a new attack of 1.2238 is the most probable scenario, but only a breach of the next resistance at 1.2261 could lead to a continuous rally for the EUR against the USD. The first support can be found at the lower border of the range at 1.2170. A successful breach here could deepen the decline to the lower target at 1.2128, but this is unlikely to lead to a change in the current market sentiment.

The bears failed to deepen the sell-off, which was stopped by the support at 109.36 and, at the time of writing, the pair is hovering above the mentioned level. If the bulls prevail, a successful breach of the resistance zone at 109.74 will strengthen the positive expectations for the future path of the USD/JPY and pave the way towards the upper resistance zone at 110.18. If the bears re-enter the market and breach the support zone at 109.36, the pair will most likely head towards the next target at 109.06.

The bulls lost their momentum and the GBP erased its gains against the USD from the beginning of the week. For the time being, the sell-off seems to be limited by the support zone at 1.4163. If this proves to be the case, the bulls should be able to take the pair to the resistance at 1.4208, a successful breach of which should lead to a more sustained rally. If, however, the mentioned support at 1.4163 is violated, the Cable will most likely head towards the major support at 1.4101.

Gold price presses on the support

Therefore, we expect witnessing more decline today, and breaking 1890.00 will reinforce the expectations to decline, taking into consideration that breaching 1915.00 will stop the correctional bearish scenario and lead the price to resume the main bullish trend again.