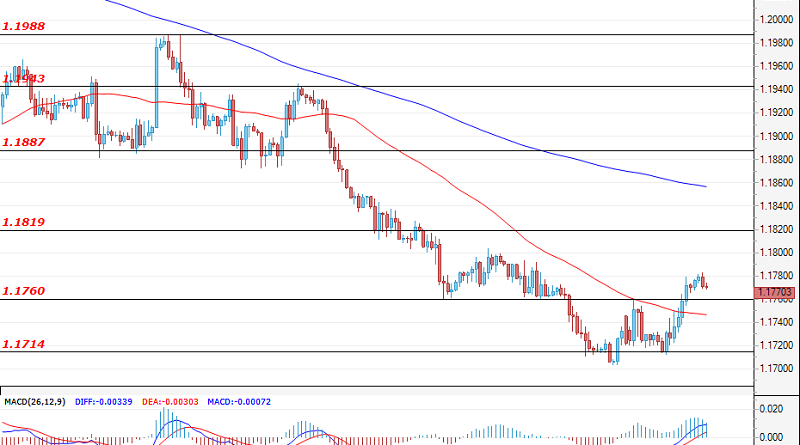 In the first trading day for this quarter, the pair violated the current downtrend and breached the resistance zone at 1.1760. The development of a complex pullback is thus highly probable. The low at around 1.1714 could be tested once again, where bulls are expected to enter and take the market higher. Their potential target would be the zone below 1.1820. The formation of a small range there would serve as a depiction of the battle between the bulls and the bears. If the buyers prevail, the trend would reverse and the rally is expected to target the levels at 1.1890 and at 1.1940. However, if the bears manage to maintain control, a breach of 1.1714 would become a highly probable scenario. Today, a rise in activity could be expected around the announcement of the non-farm payrolls and the unemployment data for the U.S. at 12:30 GMT.

The Ninja is slowing down and the market has entered a range phase. For the moment, trading is limited between the support at 110.40 and the resistance at 110.85. The latter level is coming from the higher time frames and breaching it could take longer than expected. However, a prolonged range could signal a reversal. The rally of the pair was swift and powerful, but it couldn’t form substantial supports along the way. Should 110.40 fail to hold off the bears, a sell-off towards 109.80 can be expected.

Historically, the sterling has always enjoyed a strong performance in April. This time was no different and, on the first day of the month, the bulls managed to breach the resistance at 1.3790 and the market is currently testing the next area at 1.3840. The daily support for the buyers is found at 1.3790. A change in sentiment is beginning to emerge and so a rally towards the levels of 1.3900 and of 1.3950 is possible.

The direction of the June Comex gold futures contract is likely to be determined by trader reaction to the long-term Fibonacci level at $1711.90.

Volume was thin with many of the professional players on the sidelines so we don’t think a major buyer was behind the move. Furthermore, the fundamentals are bearish. Before we can get bullish, the market has to form a support base or a “W” pattern.

Following a prolonged move down, the first leg up is typically short-covering. This is followed by a two-day pullback. If the market is going to move higher then buyers will come in on the pullback.

A trade through $1677.30 will negate the closing price reversal bottom and signal a resumption of the downtrend. The main trend will change to up on a move through $1756.00.

Gold is currently trading inside a major retracement zone at $1711.90 to $1788.50. This zone is controlling the longer-term direction of the market.

The direction of the June Comex gold futures contract is likely to be determined by trader reaction to the long-term Fibonacci level at $1711.90.