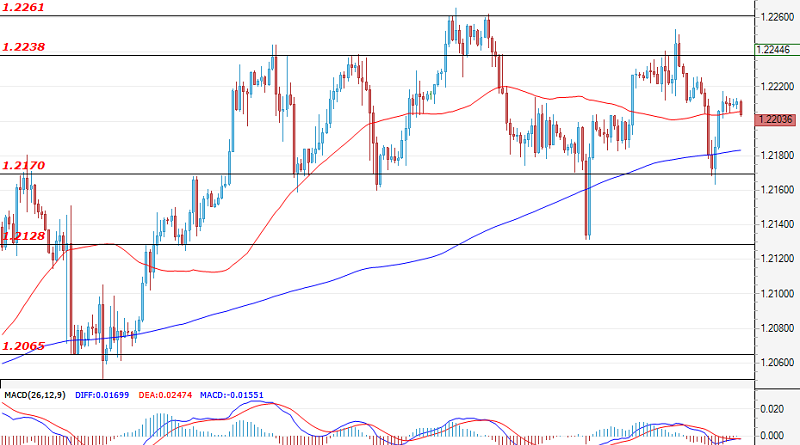 After the failed breach of the resistance zone at 1.2238, during yesterday’s trading session the single European currency lost its value against the U.S. dollar after another failed attempt by the bears to test the support zone at 1.2170. The mentioned support and resistance outline the borders of the created range, which was formed approximately three weeks ago. At the moment, neither buyers nor sellers are able to gain momentum and tip the scales in their favor. The forecasts, then, are for maintaining the move in the mentioned channel between 1.2170 – 1.2238. The most important news for investors today is the ADP non-farm employment change data for the U.S. (12:15 GMT), as well as the initial jobless claims data, again for the U.S. (12:30 GMT).

Over the past day, the U.S. dollar tried to gain momentum against the Japanese yen and breach the resistance at 109.74. Although we did witness a breach, the bulls failed to keep trading above this level and, at the time of writing, we are seeing a consolidation forming below the mentioned resistance zone. Prolonged trading around these levels could lead to a range move in the narrow channel between 109.36 – 109.74.

After the pound lost ground against the U.S. dollar since the beginning of the week, the bulls managed to limit the sell-off above the support zone at 1.4100 during the last trading session, and we even witnessed a build-up of upward momentum and a recent breach of the resistance at 1.4160. Only a breach and its confirmation above the zone at 1.4200, however, could be sufficient grounds for considering a continuation of the upward trend. At the moment, the expectations for range-bound trading between 1.4100 – 1.4200 remain intact. Today, the most important economic news that will be in investors’ focus will be the PMI services data for the UK (08:30 GMT).

Gold price settles above the intraday bullish channel’s support line, to head towards resuming the main bullish trend, as it gets good positive support by the EMA50, waiting to visit 1928.60 as a next main target.

Breaching 1918.00 will reinforce the expectations of continuing the expected bullish trend, taking into consideration that breaking 1894.20 will stop the positive scenario and press on the price to turn to decline.