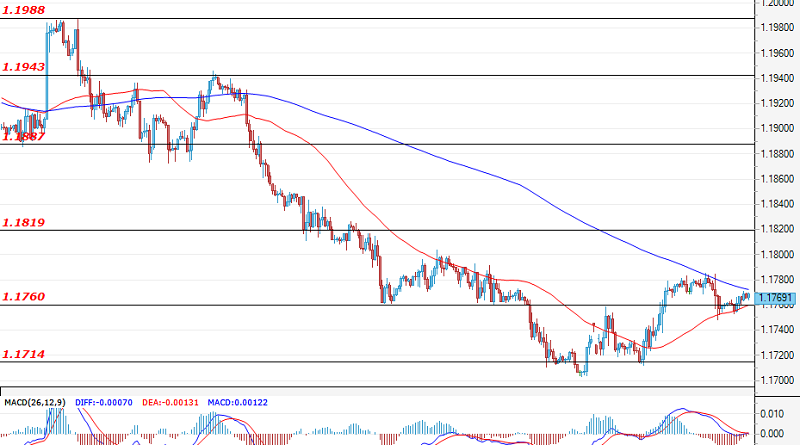 During the last few trading sessions, the euro recovered some of its recent losses against the dollar, but it is still too early to say whether this is a reversal of the downtrend or not. The correction is forecasted to continue in the short term, but should be limited to the critical resistance at 1.1890, after which the downtrend is expected to continue. The first important support is the level at 1.1714. Investors’ attention this week will be drawn towards the data on the producer price index for the U.S. (Friday; 12:30 GMT).

During Friday’s trading session, the currency pair started with a downward move in an attempt to correct the upward trend. However, this correction turned out to be quite short-lived and, by the end of the trading session, the dollar had already recovered all of its losses that it had incurred earlier that day. The forecast is for the upward movement to continue during today’s trading session and for the pair to test the local high and key resistance at 110.85. The first important support is the level of 110.39.

During Friday’s trading session, the pound tested, but failed to breach, the key resistance at 1.3843. In the first hours of today’s session, a second test of this resistance seems to be developing. Should it remain unbreached, the forecasts are for the correction to end and for the downward movement to resume. The first important support is the level of 1.3676.

Gold price succeeded to achieve our waited target at 1727.00 and attempts to breach the bearish channel’s resistance, which hints the price head to achieve more potential gains in the upcoming sessions, but we need to get a daily close above the mentioned level to confirm the continuation of the rise and open the way to head towards 1765.00.

On the other hand, we should note that failing to achieve the breach will put the price under negative pressure that its targets begin at 1692.00.