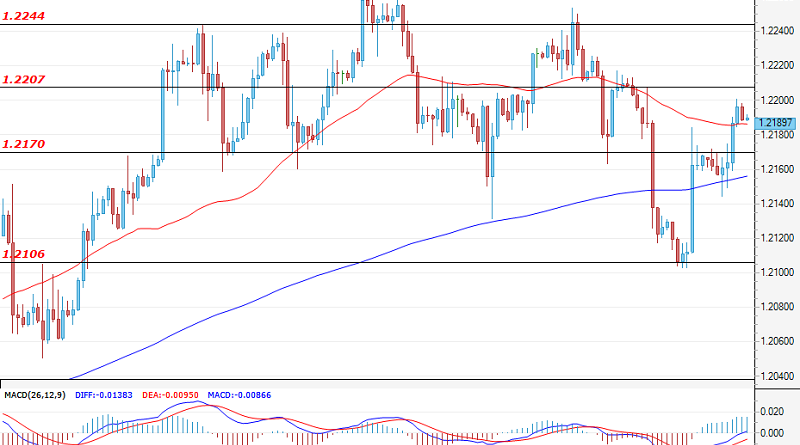 The euro continues to recover some of last week’s losses against the greenback and the resistance zone at 1.2170 was breached. If the bullish attack continues, а test of the next target at 1.2207 will remain the most probable scenario. A successful violation of the mentioned level would strengthen the positive expectations for the future path of the EUR/USD and will most likely help the pair to reach the local highs at around 1.2244. If the bears are to re-enter the market, a move towards the mentioned zone at 1.2170, which is now acting as a support, could easily end the positive move. This would deepen the sell-off, which would then head towards the lower zone at 1.2106.

Yesterday’s breach of the support zone at 109.36 is still being confirmed and, during the early hours of trading, the USD/JPY managed to hold onto some of its positions around the mentioned level. A confirmation of the breach will facilitate a move towards the next target at 109.06 and, if successful, will most likely deepen the sell-off towards the local low at 108.56. However, If the bulls manage to gain enough momentum, they could head the currency pair for an attack of the resistance at 109.74.

The bulls did not gain enough momentum for a successful breach of 1.4177 and, at the time of writing, the Cable is trading just under the resistance at 1.4177. Despite the mentioned loss of momentum, the sentiment remains rather positive and the most likely scenario is for the bulls to attack the mentioned level at 1.4177 again on their way towards 1.4241. If the bears breach the support zone at 1.4101, they could easily lead the GBP/USD towards the levels at around 1.4080 and strengthen the negative expectations for a future deeper correction.

Gold price touched 1900.00 barrier and faces solid resistance there, and it might show some temporary bearish bias affected by stochastic negativity, waiting to get positive momentum that assist to push the price to continue the rise in the upcoming period.

Until now, the main bullish trend scenario still valid and active, organized inside the bullish channel that appears on the chart, noting that our next target is located at 1928.60, while achieving it requires holding above 1865.00.