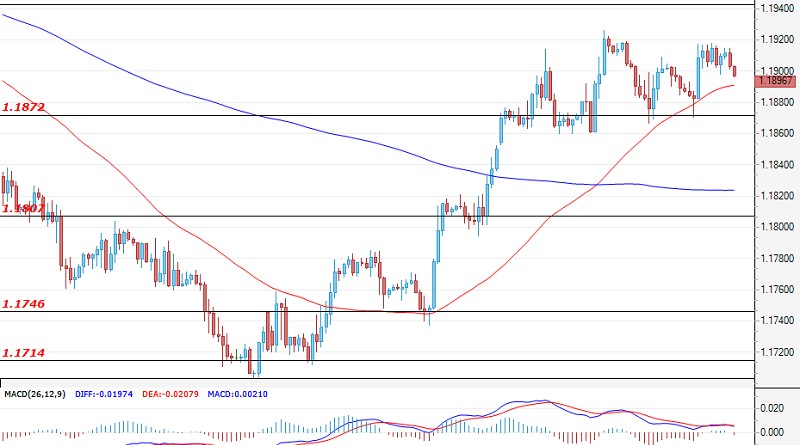 The currency pair is managing to hold above the important support level of 1.1870 after two previous unsuccessful attempts at a breach of this support. The expectations are for the pair to head towards a test of the resistance level at 1.1943, and possibly test the next resistance at 1.1988, once the consolidation is over. In the negative direction, the first important support is the aforementioned level of 1.1870.

During yesterday’s trading session, the currency pair managed to violate the support at 109.54. However, in the early hours of today’s trading session, the dollar managed to regain positions against the yen and the pair re-entered the range of 109.54 – 109.88, in which it has been trading for the last couple of days. A confirmed breach of either boundary of the range would set the future direction for the pair.

During yesterday’s trading session, the Cable made a failed attempt at breaching the resistance at 1.3760. The expectations are for the sterling to depreciate against the dollar and for the pair to re-test the critical support level of 1.3677. If the breach is confirmed, this could further the bears’ agenda and lead the pair towards a test of the support at 1.3600. In the positive direction, the first resistance is found at 1.3760. Today, the focus of investors will shift towards the manufacturing production data for the United Kingdom (08:30 GMT).

Gold price provided clear negative trades yesterday to attack 1731.00 level, but it rose again to attempt to step above the EMA50, which keeps the chances valid to continue the recently suggested positive scenario, which its next target located at 1765.00.

Therefore, we will keep our bullish overview supported by stochastic positivity unless breaking 1731.00 level and holding below it.