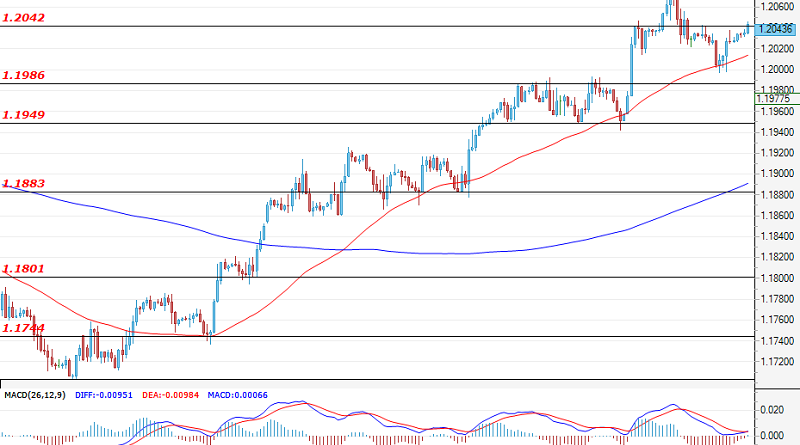 In the past day, the single European currency lost some of its value against the U.S. dollar after the initial fake breach of the resistance zone at 1.2042. At the time of writing, the bulls are retaking control once again and are aiming to violate the mentioned resistance. A confirmed breach will solidify the positive sentiment and could lead to a test of the next more significant level of 1.2175. In the negative direction, the first significant support from the lower time frames is the level of 1.1950. Today, investors will focus on the European Central Bank’s interest rate decision (11:45 GMT), the subsequent press conference of the President of the European Central Bank (12:30 GMT), as well as on the initial jobless claims data for the U.S. (12:30 GMT), all of which could lead to an increased market volatility.

Since the beginning of today’s trading session, the currency pair has been making another attempt to breach the support at 108.00. At the time of writing, the bulls have managed to limit the sales around the mentioned level, but if the bears prevail, we may witness a deepening of the sell-off and a test of the next more significant support area at 107.00. Today, the announcement of the initial jobless claims data for the U.S. (12:30 GMT) could lead to higher volatility.

The pound began regaining some of its lost positions against the U.S. dollar after the corrective move was initially limited to slightly below the support level of 1.3918. If the bulls manage to gain enough momentum, it is possible to witness a breach of the psychological barrier at the resistance of 1.4000, with the next target being the more significant resistance at 1.4250. Volatility could pick up after 12:30 GMT when the initial jobless claims data for the U.S. is to be announced.

Gold price approached our first waited positive target at 1800.00 after the bullish rally that it witnessed yesterday, and we believe that the chances valid to continue the bullish trend, noting that breaching this level will extend the bullish wave to reach 1838.00 as a next station.

Therefore, we expect witnessing more rise in the upcoming sessions, supported by the EMA50 that carries the price from below, taking into consideration that holding above 1765.00 is important to continue the bullish trend.