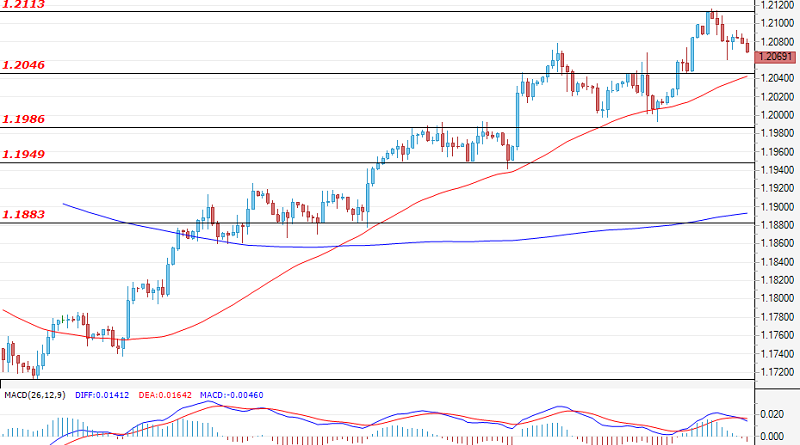 Yesterday`s rally was limited to the level at 1.2110 and the EUR/USD erased some of its gains. At the time of writing, the pair is holding positions around the zone at 1.2070, but it is highly probable that the correction will deepen towards 1.2046. A successful breach of this level would pave the way towards the lower support at 1.1986. If the bulls re-enter the scene, a new attack and a violation of the local high at 1.2110 would easily lead to a continual appreciation of the EUR against the USD, with the end goal being the resistance zone at 1.2170, followed by the one at 1.2240.

The test of the resistance level at 108.31 was successful and the USD regained some positions against the JPY. An attack of the next target at 108.80 is possible, but only a breach of the upper resistance at 109.05 could lead to further gains and a strengthening of the positive expectations for the USD/JPY’s path. If the bulls lose their momentum, the bears could head the pair towards a new test of the support at 107.49, a violation of which could easily lead to a continual sell-off for the USD/JPY.

The attack of the resistance zone at 1.3920 was not successful and the Cable consolidated around the current level at 1.3774. Only a breach of the mentioned level could strengthen the bullish sentiment and help the price move towards the resistance at 1.3989. If the bears prevail, they could easily head the price towards a test of the important support level at 1.3834. A successful violation of this level would deepen the sell-off towards the support zone at 1.3766 and, potentially, 1.3728.

Gold price attempted to break the bullish channel’s support line but it kept its stability above it, to keep the bullish trend scenario valid and active for the upcoming period, supported by the EMA50 that protects the price from suffering more losses, waiting to head towards 1800.00 followed by 1838.00 levels that represent our main targets.

On the other hand, we should note that breaking 1773.00 followed by 1765.00 levels will stop the expected rise and press on the price to turn to decline.