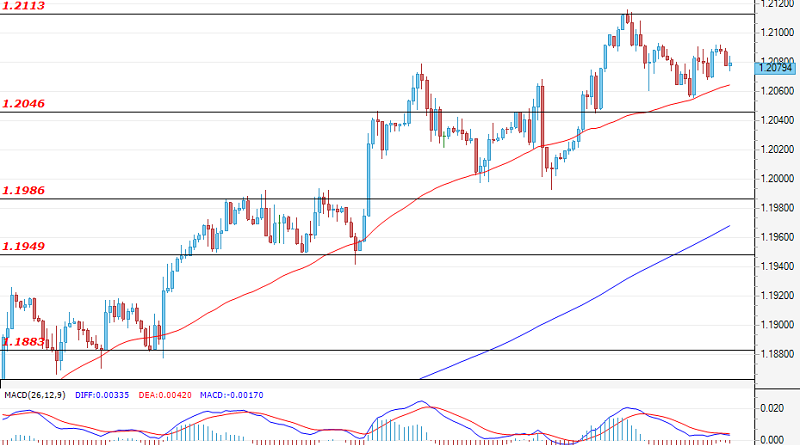 At the time of writing, we are seeing the EUR/USD entering a consolidation phase after the bears initially managed to limit the upward movement to the level of resistance at 1.2113, thus it is possible to witness a minor sell-off towards 1.2046. Looking at the higher time frames, however, we see that the sentiment remains positive – for an upward move towards 1.2200. Today, the main economic news that may boost volatility is the data on the Fed interest rate decision for the U.S. (18:00 GMT) and the follow-up FOMC press conference at 18:30 GMT.

From the beginning of today’s trading session, the bulls managed to gain additional momentum and breach the resistance level at 108.79. At the moment, it is still too early to consider the breach as confirmed, but the expectations are positive – for an appreciation of the dollar against the yen and an attack at the level of around 109.73. If, however, the bears manage to limit the upward movement to around the current levels, it is very likely that we will witness the formation of a further range movement in the channel between 107.98 – 108.79.

The Cable has begun the formation of a range movement in the 1.3834 – 1.3920 channel, and only a breach of either boundary of the range would determine the future movement of the currency pair. However, in the upward direction, a breach of the upper limit of the range alone will not be enough due to the major psychological resistance at 1.4000. On the other hand, a breach of the lower limit of the range may lead to a serious deepening of the sell-off towards the next support zone at 1.3766, followed by that at 1.3667.

Gold price trades negatively to break the bullish channel’s support line and settles below it, which urges caution from the upcoming trading, as the price needs to step above 1785.00 to confirm the continuation of the recently suggested bullish trend, which targets 1800.00 followed by 1838.00 as next main stations.

Note that breaking 1774.00 followed by 1765.00 levels will stop the expected rise and put the price under additional negative pressure that will turn the trend to decline and visit 1735.00 areas initially.