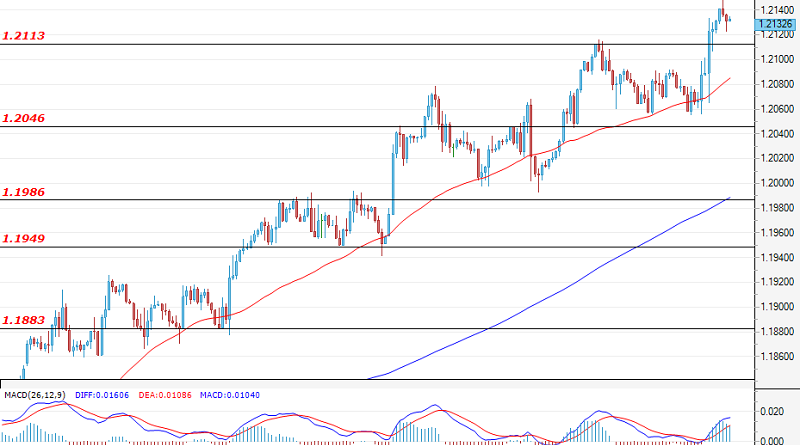 Dear traders, due to the upcoming Orthodox Easter holidays, the next daily technical analysis will be published on 05.05.2021 (Wednesday).
After a short-term correction, the euro continued to strengthen its positions against the dollar, managing to close yesterday’s trading session in the green after initially breaching the important resistance at 1.2113. It is expected for the uptrend to continue, but a test of the mentioned level at 1.2113, which already acts as a support, is still quite possible.. The first important resistance is the level of 1.2180. Today, investors’ attention will be focused on the preliminary GDP data for the U.S. (12:30 GMT).

The currency pair is found in a corrective phase of the downward trend from 110.94. However, the decline during yesterday’s trading session is a sign that this correction is coming to an end and the expectations are for the downward movement to recover. A critical resistance is the level of 109.05, and the first important support is located at 107.98.

The pound strengthened its positions against the dollar in the last few days, and today’s trading session began on the rise as well. The uptrend is projected to continue, but before that, a test of the key support at 1.3920 is very likely. If this support is not breached, it will give the pound a strong boost. The first important resistance is found at 1.3989.

Gold price rallied upwards strongly after leaning on 1765.00 level, to surpass the minor resistance line that appears on the chart and confirms revining the positive scenario again, on its way to visit 1800.00 followed by 1838.00 levels as next main targets.

Therefore, the bullish bias will be expected for the upcoming period, noting that breaking 1773.00 followed by 1765.00 levels will stop the suggested rise and press on the price to turn to decline.