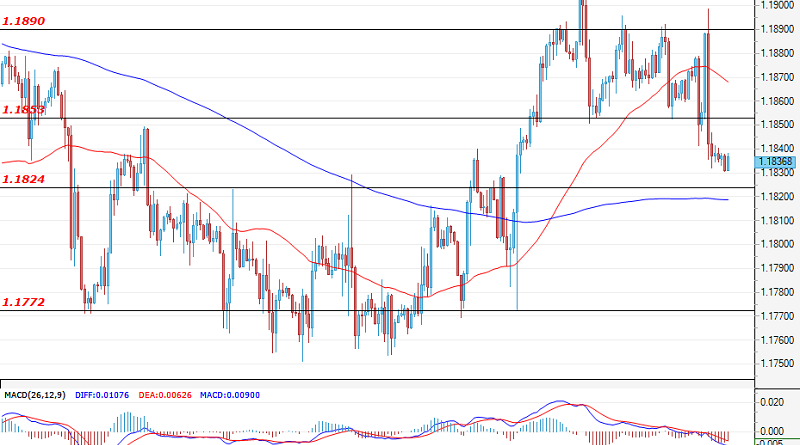 The bulls failed to breach the resistance at 1.1890 and the bears, in turn, sank the euro under the support of 1.1853. The pair is expected to test the support at 1.1824, where buyers will have a chance to re-enter the market at better prices. If this support does not withstand the bearish pressure, a decline towards 1.1770, and even 1.1700, is possible. Expectations would become bullish only if there is a breach above 1.1890. Today, an increase in activity can be expected around the announcement of the initial jobless claims for the United States at 12:00 GMT.

After a false signal for a breach of the 109.04 support, the bulls became active around the support zone at 108.70 and managed to breach the resistance at 109.33. It is possible for the bears to try and attack the 109.33 zone again, but a non-violation here can be considered as an early signal for a reversal of the direction of the market. If the rally continues, it is possible for the bulls to head towards the resistance at 110.37.

The pair is still unable to continue the rally and prices are consolidating between the support at 1.3884 and the resistance at around 1.3930. The market may need a catalyst before it could activate and move in a clear direction. Today is the decision of the Bank of England on interest rates and it is expected to lead to increased activity at 11:00 GMT. It is possible that the prices will breach the support of 1.3884 and move towards 1.3826. This would offer a better entry level for the bulls, but if they decide to return to the market, it would be desirable for prices to return above 1.3884 in order to maintain the integrity of the trend. If that isn’t the case, we would instead witness an early phase of a downtrend.

Gold price settles around the EMA50 after the positive attempt that it showed yesterday, to keep its stability below 1825.15 level, thus, our bearish overview still active, waiting to test 1797.00 level initially, which breaking it represents the key to rally towards 1770.00 as a next negative target.

On the other hand, we should note that breaching 1825.15 and holding above it will stop the expected decline and lead the price to achieve additional gains that reach 1860.00 on the near term basis.