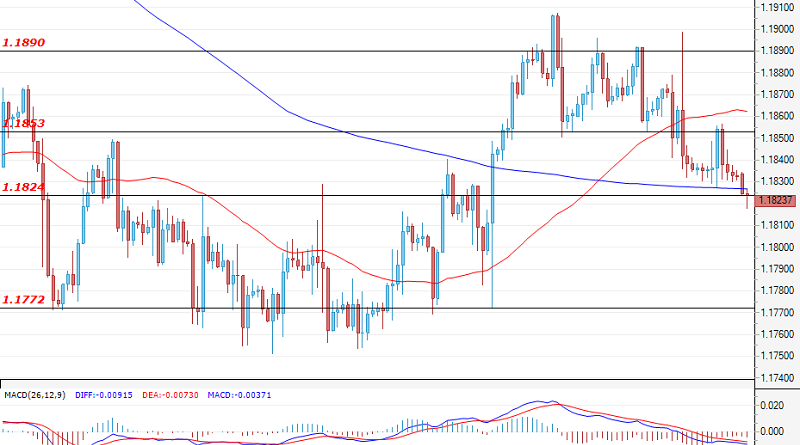 The bulls did not get enough momentum for a successful violation of the resistance level at 1.1853 and the bears re-entered the market. The EUR lost ground against the USD and, during the early hours of today`s trading, the pair tested the important support zone at 1.1824. A breach here could strengthen the negative expectations for the future path of the EUR/USD and could easily pave the way towards the levels from the end of July of 1.1772. The first resistance for the buyers is still the zone at 1.1853, followed by the upper target at 1.1890. A rise in market activity can be expected around the announcement of the U.S. non-farm payrolls and the unemployment rate data at 12:30 GMT.

The dollar continues to gain ground against the yen and, at the moment of writing, the currency pair has already tested the resistance zone at 109.77. If the breach is confirmed, a continuation of the rally towards the next target at 110.13 is the most probable scenario. In the downward direction, a successful violation of the support zone at 109.33 would end the corrective phase for the USD/JPY and could easily tank the pair again towards the zone at 109.04.

After the Bank of England left the rates unchanged yesterday, the Cable continued to trade in the narrow range between 1.3884 and 1.3930. At the time of writing, the price is hovering close to the mentioned upper border at 1.3930, but only a successful violation would lead to new gains, aiming for the high at 1.3977, for the GBP against the USD. If the bears prevail, a breach in the downward direction could lead to the deepening of a corrective phase that should, however, be limited to the level of 1.3826 or by the next target at 1.3771.

Gold price managed to reach our first waited target at 1797.00 and settles near it, and we suggest breaking this level to open the way to achieve more decline and visit 1770.00 as a next negative target.

The EMA50 supports the suggested decline, noting that breaching 1825.15 will stop the expected negative scenario and lead the price to achieve new gains that reach 1860.00.