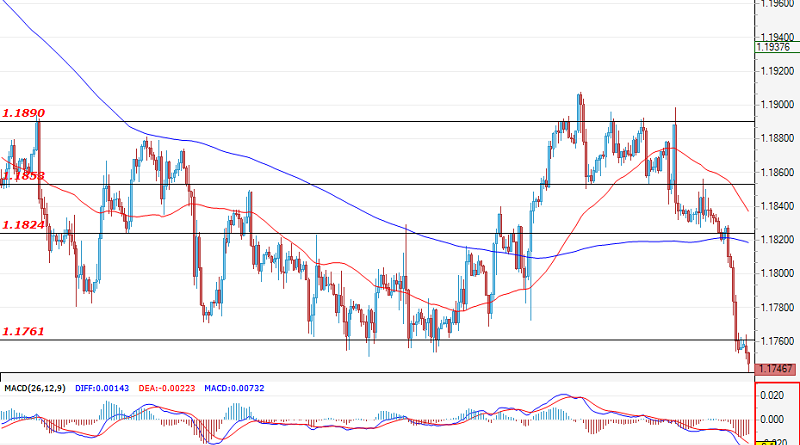 The nonfarm payrolls data published in the last trading session allowed the bears to enter the market and the U.S. Dollar has strongly appreciated against the euro. At the time of writing, we are witnessing a successful breach of the critical support at 1.1760. This is a clear signal that the pair will most probably continue its downward movement attacking the next level located at 1.1700. In the opposite direction the first important resistance lies at 1.1824. This week, investors’ attention will be focused on the data on the ZEW Economic Sentiment (Tuesday; 09:00 GMT) and the Core CPI for the US (Wednesday; 12:30 GMT).

The appreciation of the U.S. dollar against the Japanese yen was limited to just below the resistance level at 110.37. It is possible to witness a consolidation in the range 110.13 – 110.37. Only a breach оf the resistance at 110.37 would give the bulls a chance to enter the market and lead the pair towards the next level at 110.55. However, a breach of the support at 110.13 would be a signal for sell-offs toward the support at 109.77.

After the successful breach of the support at 1.3884 the currency pair manages to hold below this level, and the sentiments are similar to those for the EUR/USD. The expectations are for an appreciation of the U.S. Dollar against the other major currencies, leading the pair towards a test of the support at 1.3826, which has a chance to be successful. If this scenario does not become a reality, we may witness a move towards the resistance at 1.3830. The most significant economic events for this week are the announcement of the data on the manufacturing production and the GDP for the UK that will be announced on Thursday at 06:00 GMT.

Gold price opened today’s trading with sharp decline to reach 1685.00 level, surpassing the recently suggested negative target, and rose to settle around 1734.00 level now, and we expect to resume the negative trades to visit 1680.00 areas again.

Therefore, the bearish bias will remain dominant in the upcoming sessions supported by the EMA50, noting that breaching 1770.00 will stop the suggested negative scenario and lead the price to start recovery attempts on the intraday and short term basis.