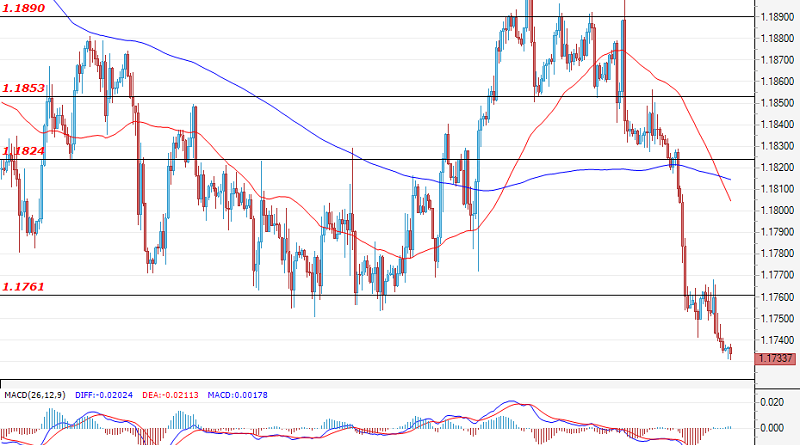 The single European currency continues to lose ground against the US dollar, earlier this week. The most likely scenario is for another decline, as the bears will try to breach the support level at 1.1700. A successful break of the mentioned support could strengthen the negative sentiment of the investors and open the way to a test of the zone around 1.1600. Today, there is a possibility for increased volatility around the announcement of the ZEW economic sentiment data for the euro zone (09:00 GMT).

The appreciation of the US dollar against the Japanese yen continues, as at the time of writing, the currency pair is trading just below the resistance level at 110.37. The most probable scenario for today is for an attack of the mentioned level and with a successful breakthrough, we may witness an attack of the next resistance area around 110.60. In a negative direction, the first significant support is the level of 109.77.

The dollar continues to gain ground against the British pound, with the trading being just above the support level at 1.3826. A successful break at this level could deepen the sell-off, which may lead to a test of the next support zone at 1.3770. In an upward direction, the main support is the level at 1.3977, which is also a psychological level for the investors.

Gold price resumes its negative trading to break 1734.00 and trades below it again, which supports the continuation of the expected bearish trend scenario efficiently for the rest of the day, paving the way to head towards 1680.00 as a next main station, reminding you that it is important to hold below 1750.00 to continue the expected decline.