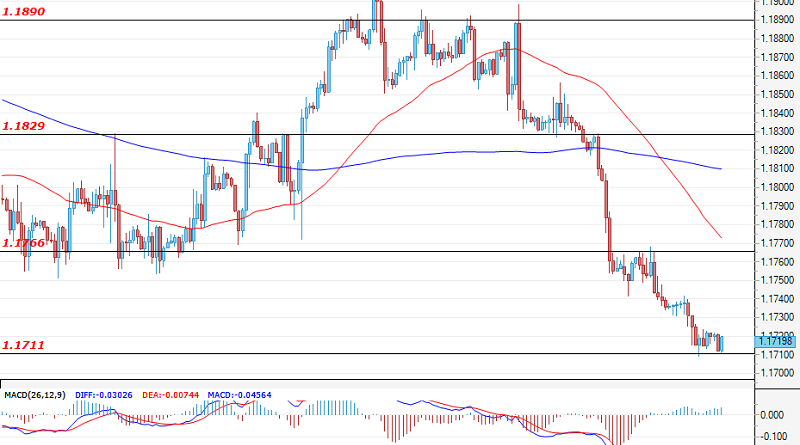 Bear pressure continues to sink the euro and the US dollar remains strong against most major currencies. Sellers slowed down around the 1.1711 support, with no significant presence of buyers on the market. Expectations are for a pullback phase of the market which should be limited by the resistance 1.1766. If 1.1711 support is breached, the sell-off could deepen to 1.1600. Today, traders will expect data on the consumer price index for the United States at 12:30 GMT. Assumptions are that inflation has peaked, but if we see another rise, investors may see this as a possibility for a rate hike and a stronger dollar in the aftermath.

The strong rally for the US dollar against the yen managed to take the pair over the high at 110.56. The area has not yet been confirmed as support and the first one is at 110.30. The expectations are for a slowdown in the trend and indecision in the market at least until the announcement of the data mentioned in the EUR/USD analysis. Should the rally continue, an attack at the top of July at 111.51 can be expected. On the other hand, the entry of bears can plunge the pair to the beginning of the momentum around 108.74.

There is a reversal of the trend of the analysed time frame. If support at 1.3827 is broken, declines to the next zone at 1.3776 and even 1.3720 can be expected. A jump in prices above the resistance of 1.3862 will be an early signal that the bulls are still on the market. In this scenario, they would try to attack the high at 1.3979 again.

Gold price confirmed breaking 1734.00 after closing the daily candlestick below it, reinforcing the expectations of continuing the bearish trend, which targets 1680.00 level as a first negative station.

Stochastic loses its positive momentum to support the chances of resuming the expected bearish trend, noting that breaching 1734.00 followed by 1750.00 levels will stop the negative scenario and lead the price to start recovery attempts on the intraday basis.