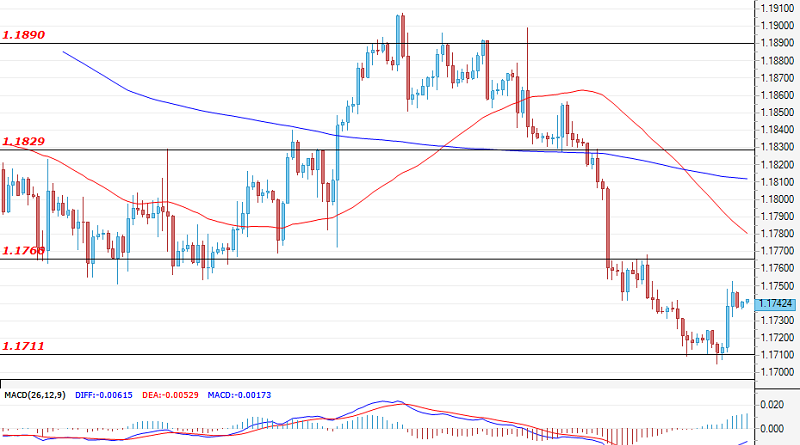 The sell-off was limited to the support level at 1.1711 and the euro regained some of its recent losses against the dollar. During the early hours of today`s trading, the pair is trading at around the level of 1.1742 and, if the bulls continue to dominate, a test of the level at 1.1763 will be the most probable scenario. The expectations are for this level to put an end to the corrective phase and resume the sell-off. A violation of the support zone at 1.1711 would lead to new losses for the EUR/USD and would strengthen the negative expectations for the future path of the currency pair. However, if the level at 1.1763 gets breached, we could witness a rally towards 1.1829 and, subsequently, a change in the current sentiment. During today’s trading session, volatility could rise when the initial jobless claims for the U.S. are announced (12:30 GMT).

Yesterday, the bulls lost momentum and the pair did not manage to remain above the last resistance at 110.56. At the time of writing, the pair is testing the support zone at 110.30 and, if the breach is successful, it would easily deepen the sell-off and could lead the USD/JPY towards f the level of 109.75. The first target for the bulls is still the mentioned level at 110.56 and only a confirmed breach will signal a continuation of the rally and new gains for the dollar against the yen.

The test of the support zone at 1.3827 was not successful and the bulls prevailed. The sterling gained ground against the greenback and the pairtested the close resistance zone at 1.3862. A confirmation of the breach could easily pave the way towards the next target at 1.3931, followed by the level of 1.3979. If the bears enter the market, a new attack of the level at 1.3827 would be the most probable scenario. А violation of the mentioned level will most likely lead to future losses for the Cable аnd would continue the sell-off towards the zone at 1.3776.

Gold price ended yesterday below 1750.00 level, to keep the chances valid to resume the recently suggested bearish trend, which targets 1735.00 followed by 1680.00 levels as next main stations.

Stochastic and the EMA50 support the expected decline, while breaching 1750.00 represents the key to extend gold price gains to reach 1770.00 as a next main station.