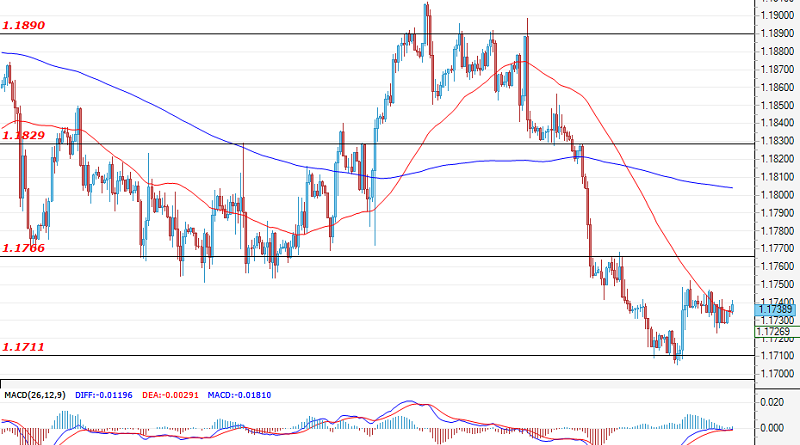 After the bulls managed to limit the sell-off to the support level at 1.1711, we are now witnessing a consolidation just above that level. At the time of writing, the currency pair is trading at 1.1738. The current upward move can be considered as a corrective phase, which could be followed by additional sales targeting another test of the support zone at 1.1711. As of today, there is no planned economic news that would lead to an increase in the volatility of the currency pair.

The momentum of the bulls was not enough and they failed to keep the trade above the resistance level at 110.56. The subsequent correction currently remains limited to just above the support level at 110.30. The forecast remains positive – for another attack of the mentioned resistance. In the event of a breach, we could observe an attack towards the next significant resistance at 111.00, followed by the area at around 111.70.

We saw a second attempt for a breach of the support at 1.3827, but this time, the bears managed to prevail and the attack was successful. At the time of writing, we are witnessing a consolidation phase just below that level, which is already playing the role of a resistance. If the dollar continues to gain positions against the British pound, it is quite possible that we could observe a test of the next support zone at 1.3776. In the event of a breach of this support as well, we may expect a test of the next more significant levels of the higher time frames at 1.3630, followed by the level of 1.3570.

Gold price attempted to break 1750.00 but it ended yesterday above it, starting today with bullish bias to hint heading to achieve some intraday gains in the upcoming sessions, making the bullish trend suggested for today, waiting to test 1770.00 as a first station.

Note that breaching the targeted level will extend the bullish wave to reach 1797.00 as a next positive target, while the expected rise will remain valid unless breaking 1750.00 and holding below it.