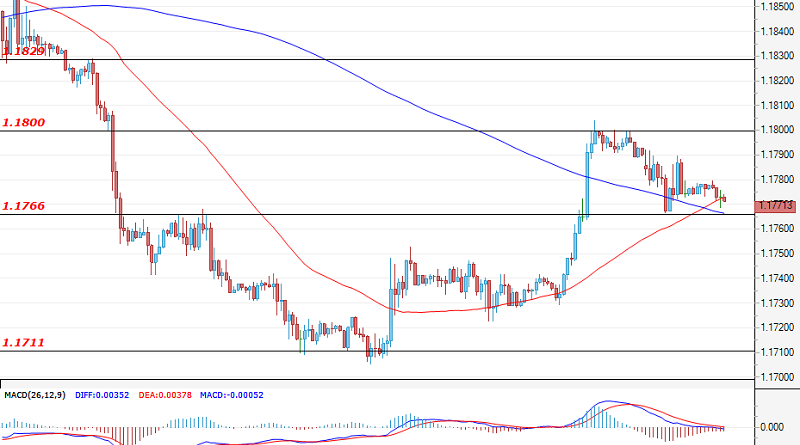 On the first trading day of the week, the currency pair was not particularly active and the euro recorded a modest loss against the U.S. dollar. The session formed an intraday support at around 1.1766, and the market is showing early signs of reversal. Declines to 1.1740 are possible, and if they get aggressively bought out, the uptrend of the union’s currency will be confirmed.. It is possible that the bulls will try to attack the resistance again at 1.1800 and, if successful, the next targets would be 1.1830 and 1.1900. Today, an increase in activity can be expected around the announcement of the retail sales data for the United States (12:30 GMT) and the statement of FOMC chairman Jerome Powell (17:30 GMT).

The bears eased the pressure around the support at 109.22 and it is possible for the market to enter a pullback phase. The first resistance for the bulls is found at 109.44, and the next one, which should limit any attempt of a rally from the buyers, is located at 109.73. The chance for a prolonged decline is confirmed by the higher time frames, and potential rallies are expected to be aggressively shorted. The bears will try to attack the support at 108.74, with their ultimate goal being the bottom of around 107.46 that was reached in April.

The British pound also recorded losses against the U.S. dollar. Potential sell-offs are expected to remain limited above the support zone between 1.3775 and 1.3800. Rallies also remained limited by the resistance at 1.3880. With that in mind, the market could enter a more pronounced range. The sentiment remains mixed and only a breach of one of the mentioned zones would increase the activity of the market and begin a directional move.

Gold price shows more bullish bias to approach gradually from the waited target at 1797.00, moving inside the bullish channel that appears on the chart, which supports the chances of surpassing the mentioned level and achieve more expected gains on the short term basis, noting that the next target reaches 1825.15.

The EMA50 supports the price from below, to continue suggesting the bullish trend in the upcoming sessions unless breaking 1770.00 and holding below it.