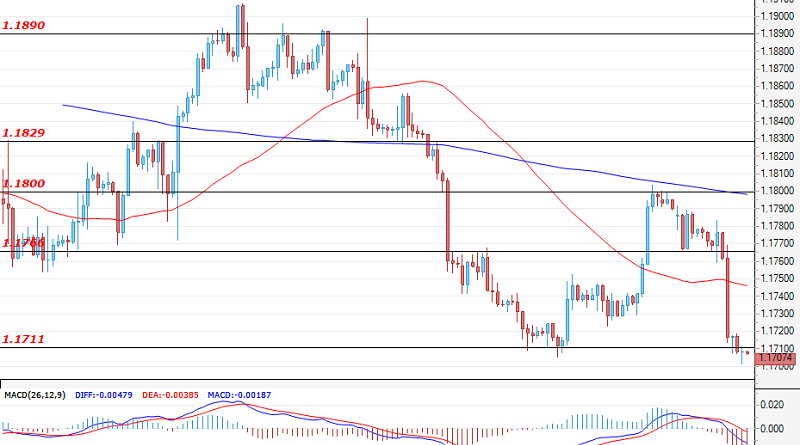 The bears prevailed and the euro lost quite a bit of ground against the dollar. During the early hours of today`s trading, the currency pair tested the support level at 1.1711 and the price consolidated around the mentioned level. If the bearish attack continues, a successful breach would lead to new losses for the EUR/USD and could easily help lead the pair towards the lows from November 2020 at 1.1610. The first target for the bulls can be found at the level of 1.1766, but only breach of the next resistance zone of 1.1800 could lead to a change in the current expectations of the market participants.

The sell-off was limited to the support level at 109.22 and the dollar regained some of its lost positions against the yen. At the time of writing the analysis, the pair holds above the violated close resistance at 109.44, but only a breach towards the next target at 109.73 could lead to a continuation of the recovery and a rally towards the upper level at 110.30. If the bears re-enter, a new successful attack of the zone at 109.22 would put an end to the positive correction for the USD/JPY and would easily pave the way towards a test of the lower support at 108.74.

The support zone of 1.3776 could not hold the bearish attack and the pound lost ground against the dollar. The decline was limited to the support zone of 1.3730 and, at the time of writing this analysis, the price is hovering around the current level of 1.3746. Negative sentiment remains intact and a new test for the bears could be the most probable scenario. A successful breach here would lead to future losses for the GBP/USD and head the price towards the levels of around 1.3700. The first resistance for the buyers can be found at the zone of 1.3776, followed by the upper target of 1.3825.

Gold price gets a positive signal

Gold price begins today with new bullish bias to approach 1797.00 level, getting positive signals by stochastic, waiting for more rise to surpass the mentioned level and head towards 1825.15 as a next positive target.

Therefore, we will continue to suggest the bullish trend for the upcoming period supported by the EMA50, noting that the continuation of the bullish wave depends on the price stability above 1770.00.