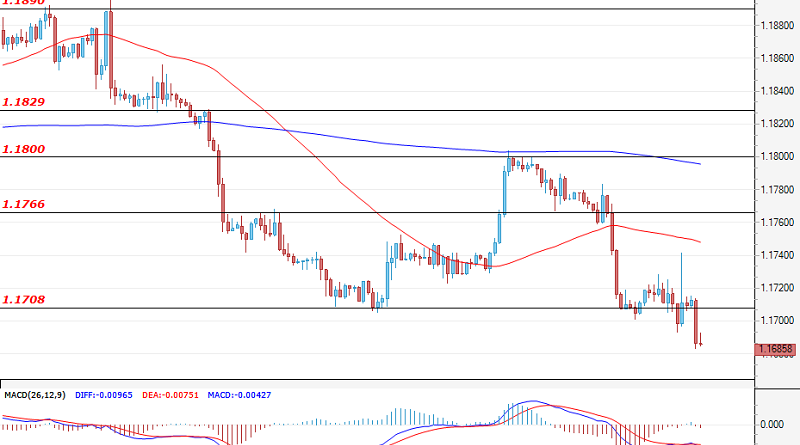 The euro continued to lose ground against the Greenback and the support around 1.1708 was breached. The zone was the annual low recorded back in March. The breach of this level could exacerbate the sell-offs towards the support at around 1.1600. The first intraday resistance is found just over 1.1708, followed by 1.1766. Sentiment remains sour and a lasting rally can be expected only above the resistance of 1.1800. Today, increased activity can be expected around the announcement of the data on the initial jobless claims for the United States at 12:30 GMT.

The currency pair continued to rise yesterday, and the dollar gained more momentum after the final interest rate decision from the Fed minutes became clear. The bulls are likely to again attack the resistance zone between 110.30 and 110.52. This area turns out to be quite a difficult obstacle for the buyers, but if a breach here is successful, prices can rise to 111.65 and even 113.50. The first daily support for the bulls is 109.73, and the main one remains the area at around 109.22.

Like most currencies, the pound also suffered losses against the U.S. dollar. The downward move gained momentum and the declines are expected to continue. A potential target for the bears could be the support at 1.3600. First daily resistances are 1.3765 and 1.3800. At the moment, a change in the downtrend seems unlikely.

Gold price under the negative pressure

Gold price shows additional negative trades to head towards potential test to 1770.00 support line, which urges caution from the upcoming trading, as the continuation of the negative pressure and breaking this level will press on the price to achieve more decline and head towards 1735.00 initially.

On the other hand, consolidating above the mentioned support will lead the price to resume the recovery attempts and achieve gains that start at 1797.00 and extend to 1825.15.