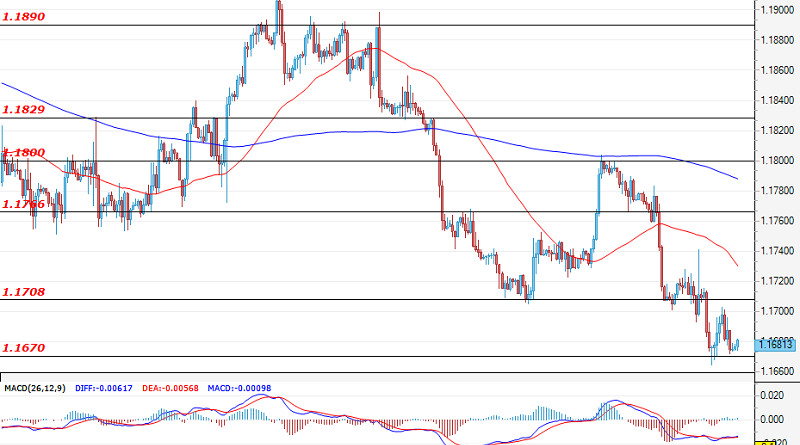 The downward movement of the currency pair was limited by the support zone at 1.1670 after two unsuccessful tests of this level. The forecasts are for the downtrend to continue and for the pair to head towards a test of the psychological level at 1.1600. However, only a breach of the support at 1.1670 would pave the way for the EUR/USD towards this zone. On the other hand, before a possible attack from the bears is to commence, it is possible for the pair to make a corrective move and test the resistance at 1.1708 and the trading activity in the range of 1.1670 – 1.1708. If the resistance level at 1.1708 is breached, the corrective movement may deepen, which could head the EUR/USD towards the next resistance at 1.1766. Today, no important economic news is going to be announced, thus a moderate volatility is expected, which may hold the pair in the aforementioned range.

In the beginning of today’s trading session, the currency pair breached the support at 109.73 and, at the time of writing this analysis, the USD/JPY is headed towards a test of the next level at 110.18. If the bulls continue to control the market and this level is breached, this would strengthen the positive sentiments for the future path of the pair. On the other hand, a downward movement, aiming to test the support at 109.48, can also be expected as there is no established trend at the moment.

The sell-off from the past few days has gained momentum as the pound continues to lose ground against the U.S. dollar from the beginning of today’s trading session. The breach of the 1.3723 support zone strengthened the bearish sentiment and the most probable scenario for today is for an attack on the support at 1.3600. A successful breach of the mentioned level could pave the way towards the first support zone from the higher time frames at around 1.3500.

Gold price fluctuates within sideways track, confined between 1770.00 support and 1797.00 resistance, waiting to breach one of these levels to detect its next destination clearly, which makes us suggest witnessing more sideways trades in the upcoming sessions.

Note that breaching the mentioned resistance will lead the price to achieve new gains that reach 1825.15, while breaking the support represents negative factor that will press on the price to decline again and head to test 1735.00 as a first negative target.