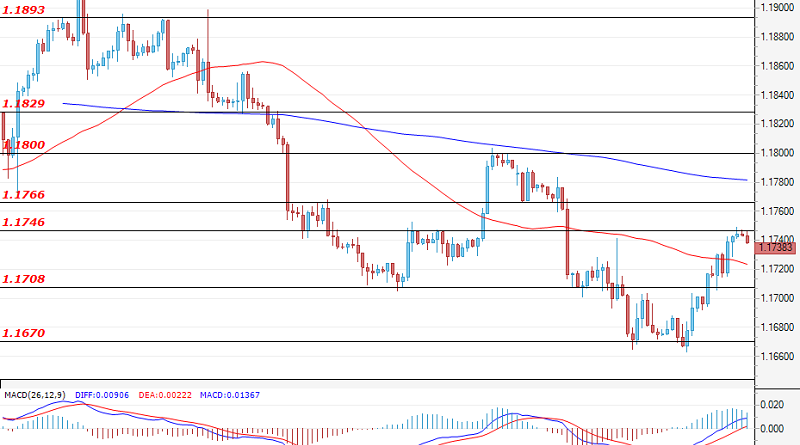 The confirmation of the breach of the zone at 1.1708 helped the euro to continue to recover some of its recent losses against the dollar. During the early hours of today’s trading, the pair tested the resistance level at 1.1746, but only a violation of the next target at 1.1766, followed by a move above the level at 1.1800 could strengthen positive expectations for the future path of EUR/USD. If bears re-enter the market, we will most likely witness a move towards the support zone at 1.1708. A successful breach of the mentioned level would easily put an end to the positive move and pave the way for the EUR/USD to attack the important support zone at 1.1670.

During yesterday’s trading session bulls lost momentum and bears prevailed. The greenback depreciated against the yen and the pair consolidated under the support level at 109.73. At the time of writing, the currency pair continues to trade in the zone between 109.49 and 110.18 and only a successful breach of one of the borders could set a clear direction for the USD/JPY. If bears continue to prevail and violate the level at 110.18, the sell-off will most likely deepen towards the support zone at 109.12. The first target for the bulls is still the mentioned resistance at 110.118, followed by the local high at 110.52.

The sterling gained some ground against the dollar and the pair is testing the resistance zone at 1.3723. A successful breach could lead to a more sustained recovery of the Cable and will most likely lead to a test of the next target at 1.3765, followed by the level at 1.3800. If bears re-enter the market and the resistance at 1.3723 is not breached, the pair will most likely head towards the support zone at 1.3599. If the aforementioned level is breached, the negative expectations for the GBP/USD will be strengthened and the Cable will most likely suffer more losses.

Gold price ended yesterday above 1797.00 level, to activate the bullish trend scenario on the intraday basis, on its way to achieve positive targets that start at 1825.15.

The EM50 supports the expected rise, noting that breaking 1797.00 will stop the positive scenario and press on the price to decline towards 1770.00 areas initially.