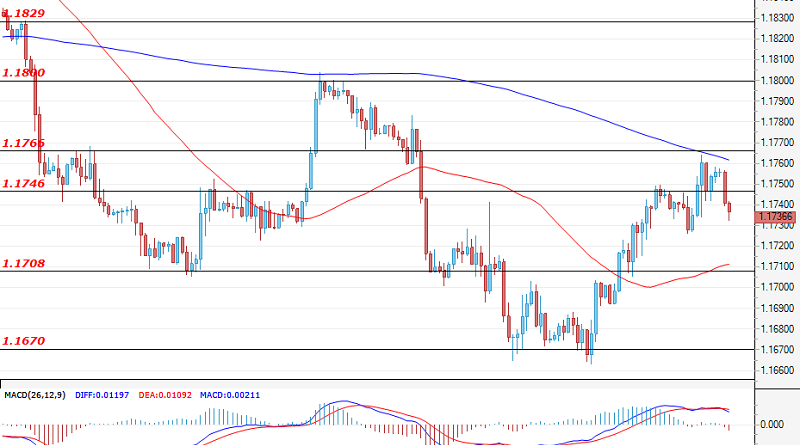 The situation remains unchanged and the currency pair is currently trading just below the resistance zone at 1.1746. The fleeting breach of the mentioned resistance was not confirmed despite the test of the next significant level at 1.1766. The bulls failed to gain enough momentum to continue last week’s recovery. The most likely scenario at the moment is for а consolidation phase at around the current level and it is also possible for a range to form in the narrow channel between 1.1708 – 1.1766.

The range movement between 109.48 – 110.18 continues and, at the moment, neither the bulls nor the bears are managing to take control. A breach of any of the mentioned boundaries of the range could draw a clearer direction for investors. There is no planned economic news for today that would affect the volatility of the currency pair.

Since the beginning of the week, we have seen a recovery for the British pound after the prolonged sell-off against the U.S. dollar, which was limited down to the 1.3600 support level during the end of last week. At the time of writing, the currency pair is consolidating at around the resistance level of 1.3723. A breach of this level could pave the way for a test of the next significant resistance at 1.3800. In the negative direction, the main support remains the 1.3600 zone.

Gold price opened today negatively, to press on 1797.00 level and trades below it, and by taking a deeper look at the chart, we find that the price forms rising wedge pattern that might press on the price to turn to decline, which urges caution according to 1791.00, as breaking it will will push the price to achieve negative targets that start at 1770.00.

Therefore, we prefer to stay aside until the price confirms its situation according to 1791.00, noting that consolidating above it will lead the price to resume the bullish wave that its next target located at 1825.15.