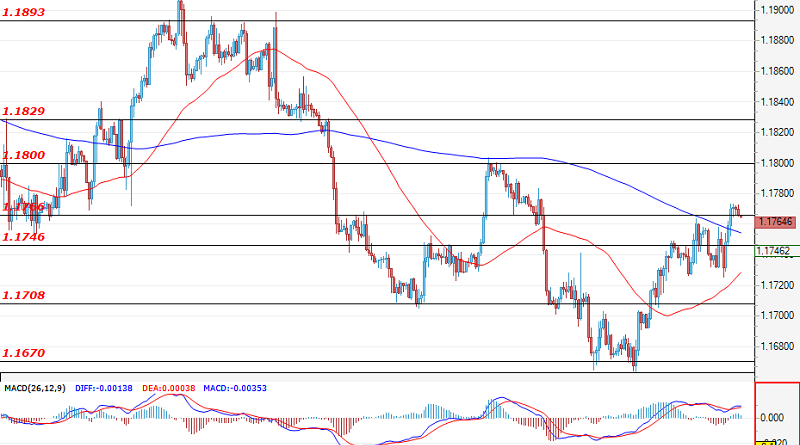 The forecasts for today’s trading session are for the currency pair to test the support at 1.1700 due to the fact that, during the early hours of today’s trading session, the EUR/USD bounced from the resistance level at 1.1770. The upward movement that began in the start of the week and led to an appreciation of the euro against the dollar would most probably end, and the pair will likely continue the downtrend which is coming from the higher time frames. Only a breach of the resistance level at 1.1770 would head the pair towards the psychological level of 1.1800. During today’s session, volatility will most likely spike after the U.S. preliminary GDP and the initial jobless claims reports are announced at 12:30 GMT.

At the time of writing the analysis, the pair is testing the resistance at 1.3765 and the situation is similar to that of the EUR/USD – for an appreciation of the U.S. dollar against the other major currencies. The expectations are for this resistance to remain unbreached and for the upward movement that began in the start of this week to end. In case the GBP/USD successfully breaches the support at 1.3723, this would signal that the corrective move has ended and that the long-term downtrend will continue towards the next target – the support level of 1.3600. In the opposite direction, a breach of the resistance at 1.3765 would be an opportunity for the bulls to lead the pair towards the resistance of 1.3800.

Gold price confirmed breaking the rising wedge’s support line after closing the daily candlestick below it, to get negative motive that we expect to push the price to achieve negative targets that start by testing 1770.00 areas, waiting for more decline in the upcoming sessions.

The price needs to break 1788.00 to ease the mission of achieving the waited negative targets, taking into consideration that breaching 1797.00 will stop the suggested negative scenario and push the price to achieve additional gains that reach 1825.15 on the near term basis.