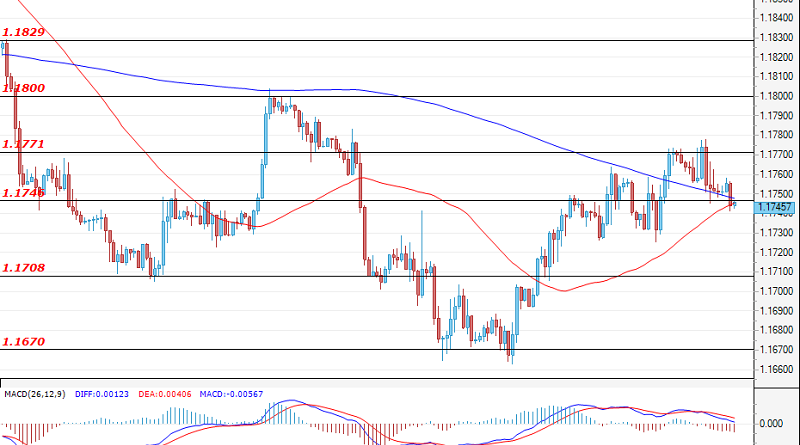 Following two unsuccessful attempts at breaching the resistance level of 1.1770, the pair is now consolidating around 1.1750 and will most likely test this resistance level one more time. Whether the test is successful or not will determine the future direction of the EUR/USD. A possible breach of 1.1770 would pave the way towards the psychological level of 1.1800. Alternatively, another unsuccessful attempt at 1.1770 would push the pair towards the support zone at around 1.1700 and the local bottom at 1.1670.

During the last couple of days, the currency pair has been trading in the narrow range between 109.48 and 110.18 and only a successful breach of one of the borders could set a clear direction for the USD/JPY. If the bulls are to prevail, then the resistance at 110.18 would be violated and the pair will most likely attack the next resistance levels at 110.50 and at 111.00. Alternatively, if 109.48 is violated, the pair would test the support at 109.11.

Following an unsuccessful attempt to breach the resistance level of 1.3765, the Cable quickly tested and violated the support of 1.3723, which signals for the end of the corrective movement, which had started at the beginning of the week. The forecast is for the dollar to appreciate against the sterling and for the pair to test the main support level of 1.3600.

Gold price opens today with additional rise to attack 1797.00 level, which urges caution from the upcoming trading, as confirming breaching this level will stop the recently suggested negative scenario and lead the price to achieve additional gains that reach 1825.15.

Stochastic shows negative signals now that support the chances of resuming the expected decline, which its targets begin by testing 1770.00 areas.