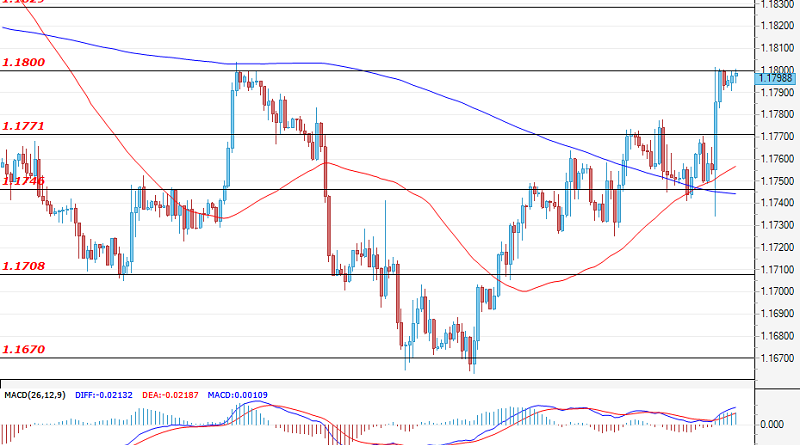 At the end of last week, the currency pair made yet another attempt at breaching the resistance level of 1.1770 which, this time around, proved to be successful. At the time of writing the analysis, the EUR/USD is headed towards a test of the next resistance and psychological level of 1.1800. If the bulls keep the momentum going and start the week with a confirmed breach of 1.1800, then we might see a test of 1.1830 and even one of 1.1890, which would be coming from the higher time frames. In the negative direction, the previously mentioned level of 1.1770 is now acting as a support. This week, investors’ attention will be focused on the data on the non-farm payrolls change for the U.S. (Friday; 12:30 GMT), consumer price index for the euro area (Tuesday; 09:00 GMT) and on the data on the ADP non-farm employment change for the U.S. (Wednesday; 12:15 GMT).

The currency pair continues to trade in the narrow range between 109.48 and 110.18 and this might continue for a couple more days, before either of the borders is violated. At the time of writing, the most likely scenario is for the pair to test the bottom border of the range and approach the support level of 109.11.

At the end of last week, the Cable re-tested the resistance level of 1.3765 and, this time, the test was successful. The forecast is for the dollar to depreciate against the sterling and for the pair to test the resistance level of 1.3800. In the negative direction, the closest support level is 1.3723, while the main support is found at 1.3600. During this week, the most important economic news that would affect the movement of the Cable is the data on the manufacturing PMI (Wednesday; 08:30 GMT) and the data on the services PMI (Friday; 08:30 GMT), both for the U.K.

Gold price rallied upwards strongly to reach few pips away from our waited positive target at 1825.15, as we mentioned in our last technical update to the turn to rise after the strong breach to 1797.00 level, and we suggest the continuation of the bullish trend domination to surpass the mentioned level and open the way to head towards 1860.00 as a next main target.

The EMA50 supports the suggested bullish wave, and we might witness temporary decline to test the key support 1797.00 before resuming the expected rise, taking into consideration that breaking this level will stop the bullish trend and press on the price to decline towards 1770.00 initially.