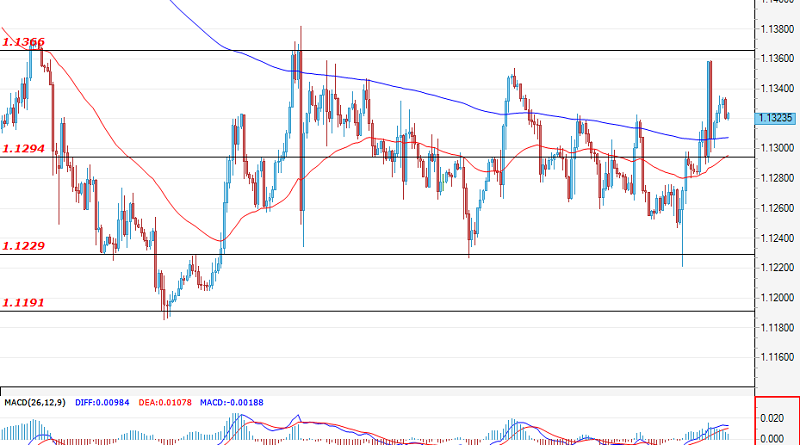 The euro managed to close the last session in the green, with the global picture remaining unchanged. On the higher time frames, the pair formed a range with support at 1.1230 and resistance at around 1.1365. In the shorter time frames, the market shows early indications of a change in sentiments and the possibility of a potential rally. It seems that the bulls are ready to defend their positions around 1.1230 after the false breach of the zone. The current formation suggests the potential for a larger leg up, but in order for this to happen, the area of ​​1.1365 must be cleared first. In such a scenario, an attack on the next resistance at around 1.1510 can be expected. Today, increased activity can be expected around the release of the CPI data for the Eurozone at 10:00 GMT.

After prolonged consolidation, the bulls failed to make significant movement and their attack was stopped in the area at around 114.17. Sentiments are in favor of the pair declining and the expectations are for a new wave of sell-offs. Today’s decision of the Central Bank of Japan to keep interest rates unchanged did not have much of an impact on the Ninja. It is possible that the bears will launch an attack on the support at 113.40, and if successful, the next target of the movement may be the lows at around 112.58. If this scenario does not materialise, it is possible that the market will remain indecisive and trading activity could remain limited between the support at 113.40 and the resistance at 114.17.

The sterling continued the series of back-to-back gains for the week, and the surprise rate hike by the Bank of England led the pair towards the resistance at 1.3360. The pair breached the structure at around 1.3260 – 1.3280, with the market signalling for a mood change and a potential reversal of the pair’s direction. The first daily support is found at 1.3280 and it is possible that this area could be tested. If the bullish attitudes are preserved, a new attack on the 1.3360 zone is possible. In case of a breach of this level, an increase towards 1.3500 can be expected. The key support for the bulls is found at around 1.3184.

Gold price breached 1797.00 level clearly and ended yesterday above it, to stop the negative scenario and lead the price to achieve more expected gains in the upcoming period, on its way to visit 1825.15 as a next positive target.

Therefore, we are waiting for more rise today, and breaching 1805.00 will ease the mission of achieving the waited targets, while breaking 1797.00 represents the key to return to the bearish track again.