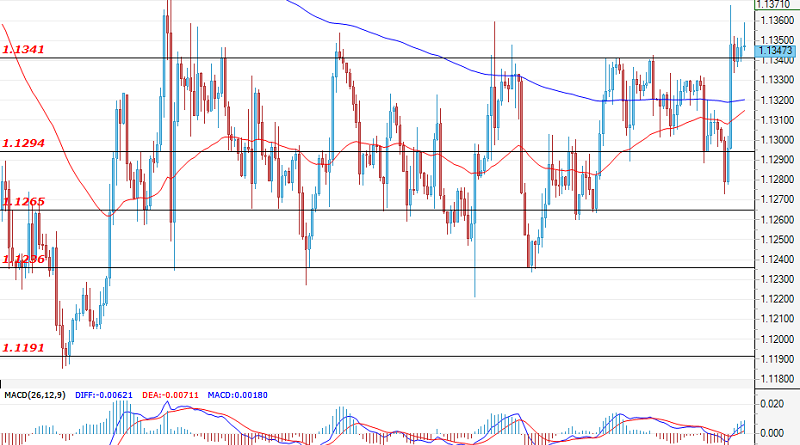 The European common currency gained some ground against the U.S. dollar and the pair tested the resistance at 1.1341. At the time of writing the analysis, the pair is consolidating above the mentioned zone and, If the breach is confirmed, then a rally towards the level at 1.1380 would be the most probable scenario. However, If the bears prevail, a new successful attack on the support level at 1.1294, followed by a breach of the next target at 1.1265, would pave the way for a test of the major support zone at 1.1236 and would lead to a change in the current expectations of the market participants. Today, volatility might pick up after the announcement of the initial jobless claims for the U.S. at 13:30 GMT.

The positive sentiment remained unchanged and the Ninja violated the resistance zone at 114.89. If the bullish pressure continues, then the rally could easily lead to a test of the resistance level at 115.50. In the downward direction, the development of a correction will most likely lead to a test of the near support at 114.68, a breach of which would deepen the decline towards the lower target at 114.43, where the bulls will most likely step in.

The appreciation of the British pound against the U.S. dollar continues and, during the early hours of today`s trading, the pair is headed for a test of the major resistance at 1.3500 that is coming from the higher time frames. A successful breach of the mentioned zone would strengthen the positive expectations for the future path of the pair and could easily help the Cable reach the level of around 1.3570 from October 2021. The first support can be found at the zone of 1.3454, followed by the lower target at 1.3415.

Gold price kept its consolidation above 1797.00 level after attempting to break it yesterday, to keep the bullish trend scenario valid and active for the upcoming period, waiting to head towards 1825.15 as a main positive target.

The EMA50 continues to support the expected bullish wave, reminding you that breaking 1797.00 will put the price under negative pressure that targets testing 1770.00 before any new attempt to rise.