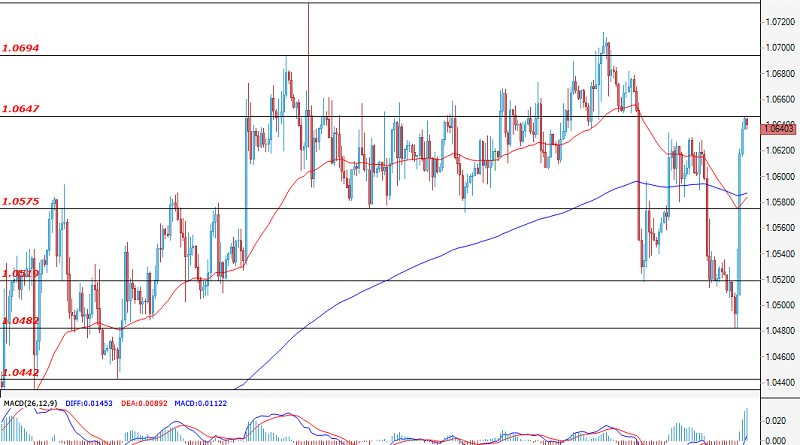 The single European currency experienced a volatile first week of trading in 2023. On its last day, we saw the U.S. new jobs data at 13:30 (GMT) and it showed that the Fed is struggling to cool down the job market, but its actions are having their intended effect on the economy, as shortly after the jobs data, the PMI came out worse than expected. This was seen as negative news for the dollar and it fell against the euro with the pair reaching the resistance at 1.0575 and the one at 1.0647 without hesitation, where the rally ended. Given the sharp move, it is likely for a corrective move to develop. Today, there is a set of data on the state of the EU economy, from 7:00 (GMT) to 10:00 (GMT), but whether the rise of the euro will continue, depends on the reaction of traders, as well as an in-depth analysis of Friday’s data

In the first days of trading in 2023, the Ninja was able to find a bottom and managed to rally progressively. That’s what it looked like on Friday last week as the moves managed to hit a new weekly high of 134.75. The bears took control of the market after analysing the U.S. PMI data leading to a sell-off of the dollar. A crash of the currency pair followed and it stopped at 131.91. Today is a day off in Japan, so the market here is expected to be driven by the strength or the weakness of the dollar which will follow after analysing last week’s data. If the support at 131.91 holds, the bulls might be able to recover some of the lost ground.

The Cable also experienced a highly volatile final day of the first week of 2023. Movements turned lower as the London session opened and hit a new weekly low of 1.1838. After seeing the U.S. PMI data on Friday, the bulls took control and pushed the pair up all the way to the resistance level at 1.2098 where the rally stopped. Today, there is a lack of data to push the bulls to another strong attack, so the dollar is expected to be the driver of the currency pair. Whether the growth will continue, depends on whether the weakness of the greenback continues today.

Gold price shows weak trades since morning, affected by stochastic negativity to show some slight bearish bias, and as long as the price is above 1835.00, our bullish overview will remain valid for today, supported by the EMA50 that keeps carrying the price from below, reminding you that our waited targets begin at 1900.00 and extend to 1928.60.