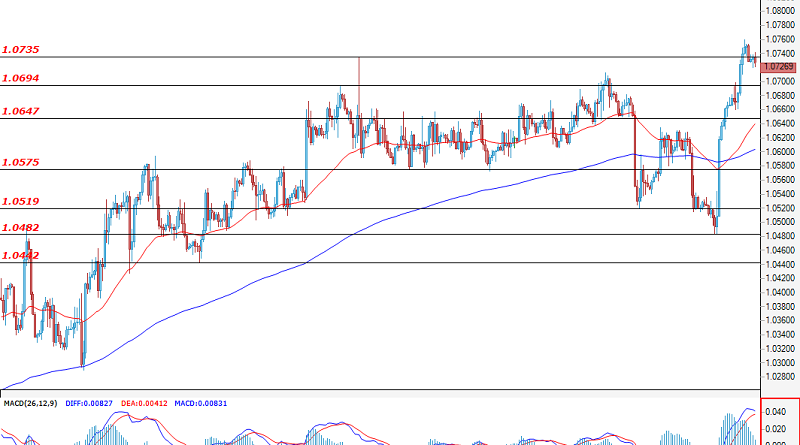 The past session was positive for the single European currency. The bulls have recaptured their gains from last week, but for now they are unable to hold above the resistance at 1.0735. The bears, on the other hand, are looking to lead the price of the currency pair back to the support at 1.0694 and then a test of the second support at 1.0647 is very likely. However, sentiment remains positive and it is possible to witness an attempt to overcome the resistance at 1.0786 available on the longer time frames

The long range movement of the currency pair may be coming to an end, but for that the bears need to permanently overcome two supports: at 130.55 and 129.52. Conversely, the important resistance at 134.75 is still a very distant target for the bulls. To reach it they will have to go through two more supports at 131.90 and 133.16. Trader sentiment seems negative and the bears’ attempts are more likely to succeed.

Over the past two sessions, the Cable has managed to recoup some of its losses against the dollar. The bulls settled permanently above the support at 1.2153 and are likely to test the resistance at 1.2237. In order to observe the downward movement, the bears need to direct the pair back to the support zones at 1.2098 and 1.2020.

Gold price attempts to breach the bullish flag’s resistance mentioned this morning, accompanied by witnessing positive overlapping signal through stochastic, waiting to resume the bullish wave that targets 1900.00 followed by 1928.60 levels as next main stations, reminding you that the expected rise depends on the price stability above 1862.00.