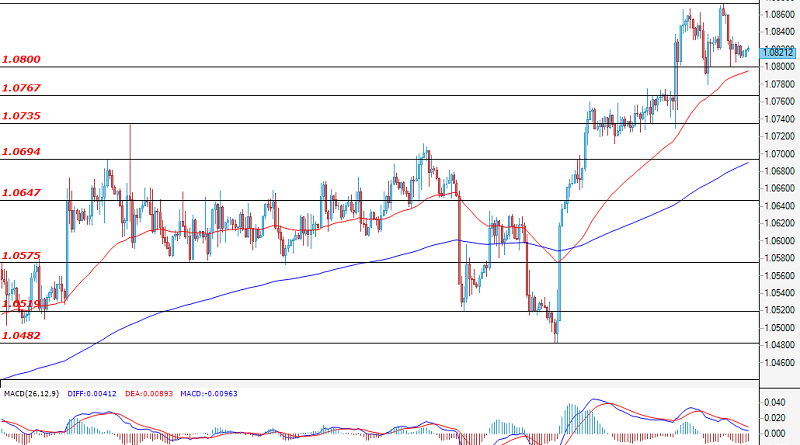 The first day of this trading week was volatile for the single European currency. In the early hours of the day, the dollar was weak and this gave the euro a chance to reach a new local high of 1.0873. The pair held there until the release of the German wholesale inflation data at 7:00 (GMT). The reaction was negative and a decline followed, which erased the entire daily growth and reached the daily low at 1.0800. The level played the role of a support and the day ended around 1.0820. Today, we have already seen the most recent data on German inflation at 7:00 (GMT) and the price action is currently dictated by it. Later, we will also see the assessment of German ZEW sentiment, which will also impact the rate of the euro against the Greenback as the main resistance remains around the level at 1.0870.

At the start of the week, in the early hours of Monday, the Ninja took a turn towards the lows and managed to reach a new monthly low at 127.21. The move was driven by gains for the yen following a positive reaction to the manufacturing inflation data, which was released yesterday in the early morning. The level played the role of support and the pair started a rally that continued throughout the day. We saw a break at the key level of 128.62, but the USD/JPY failed to hold above it and the day ended around 128.50. Whether the rally continues today depends entirely on the strength of the dollar, with important data for it today released at 13:30 (GMT).

Monday got off to a promising start for the Cable, with the bulls taking control of the market early in the day and managing to hit a new monthly high of 1.2288. However, the pair failed to keep its momentum and a sell-off towards 1.2169 started. The speech of Bank of England’s Governor Andrew Bailey at 15:00 (GMT) failed to give the pound any strength and the day ended around 1.2200. At the time of writing, the aforementioned level has stopped the bears, but today is a big day for traders of GBP/USD as at 7:00 (GMT) we saw data on the UK Labour Force Data Package. Movements are still dictated by the information in the macroeconomic calendar.

Gold price trades negatively to approach 1900.00 barrier, reinforcing the expectations of continuing the bearish bias for the rest of the day, which targets 1885.00 as a next main station, being aware that it is important to monitor the price at this level, as breaking it will extend the bearish wave to reach the bullish channel’s support line around 1860.00 before any new attempt to rise, while breaching 1920.50 represents the key to resume the main bullish trend.