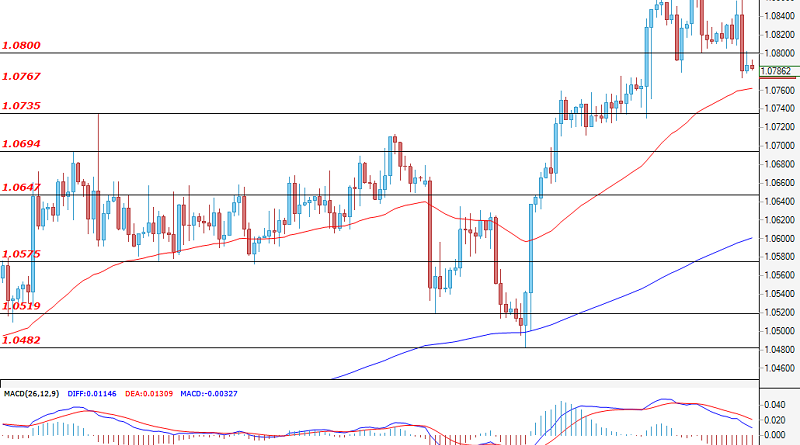 The past session was negative for the single European currency. Bears have recovered some of their losses, with the pair sitting just below support at 1.0800 at the time of writing. If the bulls fail to fend off the bear attack, it is possible that the rate heads to the next level of support at 1.0767. Otherwise, if the bulls activate, the pair is likely to be sent to the resistance level from a few days ago – 1.0873. Today will be filled with macroeconomic news and higher volatility is possible during the announcement of CPI EU at 10:00 GMT, where the previous value was 9.2% and no change is expected, as well as at 13:30 GMT when the data is released for the PPI for the U.S. with a previous value of 0.3% and expectations for -0.1% and the Retail Sales with a previous value of – 0.6% and a forecast for -0.8%.

Today’s trading session started with an onslaught of the bulls and a breach through the resistance level at 130.55 after the Bank of Japan Interest rate decision did not surprise the market and came out as the forecast for -0.10%, but the bank tweaked its yield curve control mechanism and signalled more stimuli, if necessary. If the bears are not confident in their abilities, the pair may head to the next resistance level at 131.49. Otherwise, if the bears do start their attack, it is quite likely to reverse the direction and take the pair towards the support level at 128.62. Higher volatility can be expected upon the release of the data mentioned in the EUR/USD analysis.

Cable’s day started with the bears trying to hold off the bulls’ onslaught, with the pair trading just below the resistance level at 1.2288 at the time of writing. If the bears fail to hold off the attack, the rally would continue and a possible scenario is an attempt to breach the aforementioned resistance. Important news for traders here is the consumer price Index for the UK where the previous reading was 10.7% with a forecast of 10.5%. Also, high volatility is likely at the announcement of the data mentioned in the EUR/USD analysis.

Gold price rebounds upwards clearly to start attacking 1915.00 level, to hint the attempt to regain the bullish trend again, which makes us stay aside until we get clearer signal for the next trend, through breaching the mentioned resistance or breaking 1900.00 support.

Note that breaching the resistance will push the price to achieve new gains that start by testing 1928.60 and extend to 1950.00, while breaking the support will reactivate the negative scenario that its next target located at 1885.00.