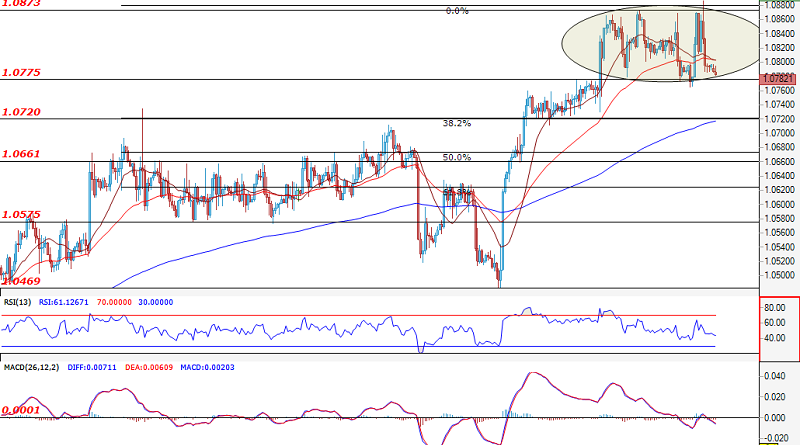 The pair’s consolidation phase is still intact, as the bulls’ attempts to violate the resistance at 1.0873 appeared to be unsuccessful which led EUR/USD in the downward direction and a test of the support at 1.0775. The pair is still locked in the range 1.0775 – 1.0873 and only a confirmed breach of the resistance at 1.0873 may be considered as a confirmation signal that the upward movement is not just a correction but a reversal of the overall (long-term downtrend) after the bears’ pressure that led the pair to the lows at 0.8896. The peak at 1.0873 and the upper border of the range was last seen in the first quarter of the previous year. If the bears manage to keep the pair below the intersection of the 50 and 17 SMAs (simple moving averages) , then a short correction towards the Fibonacci retracement level at 1.0720 could be expected. On the other hand, in the upward direction, only a confirmed breach of the resistance at 1.0873 of no less than 15-20 pips may suggest a stronger resumption of the uptrend with the next target for the bulls being the psychological level at 1.1000, followed by the one at 1.1100. Today, higher volatility may be expected around the announcement of the Initial jobless claims and Philadelphia Fed Survey for the U.S. at 13:30 GMT.

After falling down from 131.50 to the resistance at 128.11, the pair is headed towards a test of the support at 128.10 where a successful breach of this level could easily pave the way for the pair towards the next key support at 127.21. On the other hand, if the bulls resist the bears’ pressure, a slight correction towards the resistance at 129.2 could take place and, if the bears prevail ,the pair could easily go south targeting the next key support at 127.21

The Cable managed to gain ground against the US dollar, but the last trading session was unsuccessful as the pair bounced back from resistance at 1.2430. At the time of writing this analysis the pair is attempting to breach the above mentioned support, and if this scenario is realised, a deepening of the corrective move and a test of the next support at 1.2260 is highly possible. However, the uptrend seems to be quite stable and further gains for the buyers with their next target being the resistance at 1,2300 are highly likely.

Gold price shows positive trading to head towards potential test to the sideways range’s resistance at 1928.60, and the sideways move scenario remains valid until the price surpass the mentioned resistance or breaking the support at 1900.00.

To recognize the expected targets from the breach, please review our morning report.