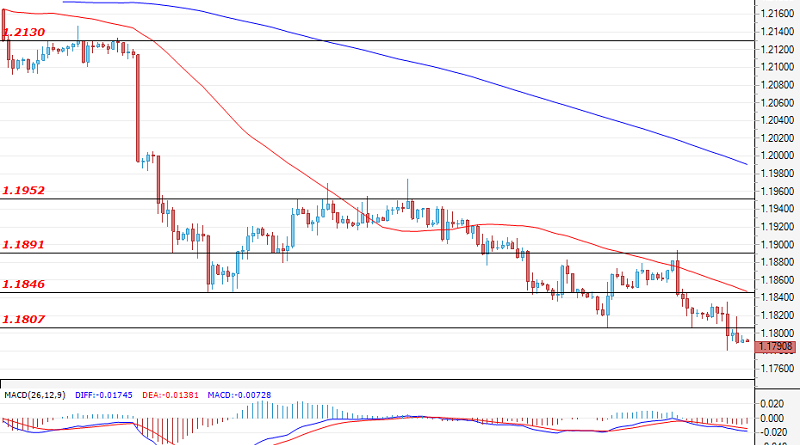 During yesterday’s trading, the EUR/USD fell below the support zone at 1.1807 and, at the time of writing, the pair is still trading below the mentioned level. If the breach is confirmed, new losses and a continuation of the downward move for the euro against the greenback can be expected.. If the bears lose momentum, the first target for the bulls can be found at the resistance level of 1.1846, but only a successful violation of the zone at 1.1952 could lead to a change in the current sentiment. Today, investors will focus on the data for the change in initial jobless claims for the U.S. (12:30 GMT), which could lead to relatively large swings in both directions.

The corrective move of the USD/JPY seems to be limited at the level of 110.44. At the time of writing this analysis, the currency pair is still testing the support zone at 110.44. Despite that, the corrective phase seems to be ending. If the aforementioned level is breached, the U.S. dollar will most likely continue to lose its value against the yen and target the level of 110.21. If the bulls re-enter the market, their first resistance would be the level of 110.79. Only a breach towards the zone at 111.03, however, would signal for a more sustained rally.

The Cable continues to trade close to the lower border of the zone between 1.3770 and 1.3862. A new test of the mentioned support at 1.3770 is quite likely, but only a successful breach of 1.3729 could lead to bigger losses for the sterling against the dollar and could help the pair reach the support at 1.3655, which is coming from the higher time frames. In the upward direction, а successful attack at the resistance zone of 1.3862 could easily lead to a rally towards the next targets at 1.3925 and 1.4001.

Gold price settles above 1797.00 level, which keeps the bullish trend scenario active for the upcoming period, which targets 1825.15 level as a next main station.

The EMA50 supports the expected rise, noting that breaking 1797.00 and holding below it will press on the price to return to the correctional bearish track that its targets begin by testing 1770.00 again.