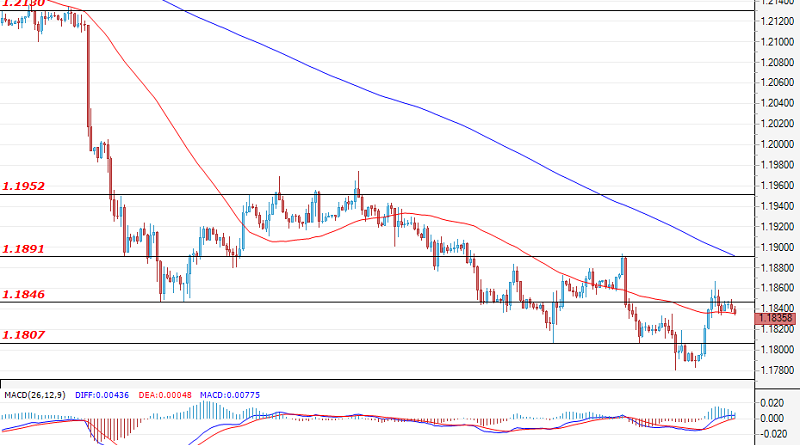 After the euro’s depreciation against the dollar during the previous sessions and the fleeting breach of the support at 1.1800, the bulls managed to limit the sell-off, which led to a correction. The consolidation around the level of 1.1846 could continue and a test of the resistance zone at 1.1891 is not excluded. Judging by the higher time frames, the negative expectations for a deeper sell-off are still intact and a move towards the support area at 1.1700 is still probable. There is no economic news foreseen today that could affect the currency pair’s volatility, with the exception of the OPEC and G20 meetings.

The sell-off during yesterday’s trading session intensified as the bears managed to easily pass through the support of 110.44, followed by a breach of the level at 110.20. The bulls managed to enter the market, limiting the sales just below the support at 109.70. At the time of writing, we are seeing a corrective move that could test the zone at 110.21, which already plays the role of a zone of resistance in the upward direction.

The consolidation around the support zone at 1.3770 continues and this might be the beginning of a range phase within the channel between 1.3729 – 1.3862. At the moment, neither the bulls nor the bears are able to gain enough momentum to establish themselves on the market and set a clearer direction. With the possible superiority of the bears and a successful breach of the support zone at 1.3670, it is possible to witness an additional sell-off and a reversal of the positive trend. Today, the data on manufacturing production in the UK (06:00 GMT) could affect the volatility of the currency pair.

Gold price leans on the support base

Gold price bounced bearishly after approaching the waited target at 1825.15, to lean on the key support 1797.00 and rise again, which keeps the bullish trend scenario valid and active for the upcoming period, supported by the EMA50, waiting to resume the positive trades again.

Holding above 1797.00 is important to continue the expected rise, as breaking it will press on the price to return to the correctional bearish track that its next target located at 1770.00.