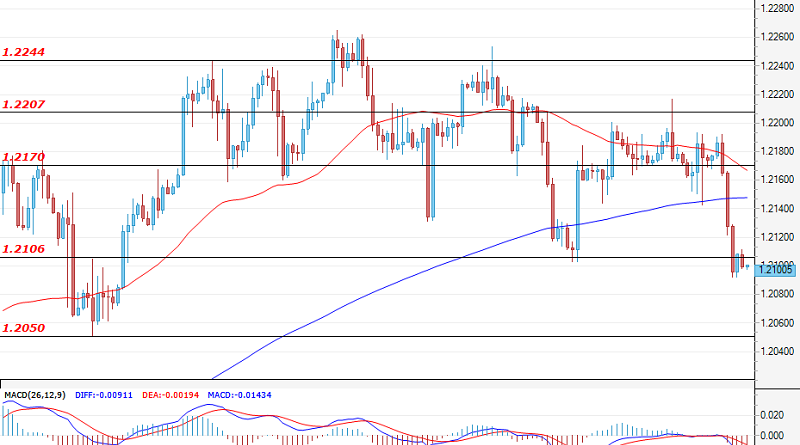 The euro lost quite a bit of ground against the greenback on Friday and, at the time of writing, it is confirming the breach of the support level at 1.2106.. The bearish attack is expected to continue and, if the breach is confirmed, a deeper sell-off towards the next support zone at 1.2050 can be expected.. The first resistance for the buyers can be found at the level of 1.2170, but only a successful breach of the next target at 1.2207 could lead to a change in the current market sentiment. This week, investors would focus on the U.S. data on the retail sales and the producer price index (Tuesday; 12:30 GMT), as well as on the Fed interest rate decision (Wednesday; 18:00 GMT) and the claimant count change data (Thursday, 12:30 GMT).

During the early hours of today`s trading, the attack of the bulls continues and the currency pair is about to re-test the important resistance level at 109.74. A successful breach here could lead to a rally towards the local highs at around 110.18. If the bears prevail and the resistance at 109.74 is not breached, an attempt for a breach of the lower border of the range between 109.36 and 109.74 will become highly probable. A successful violation could easily deepen the move towards the lower target at 109.06.

Friday’s bullish attack on the resistance at 1.4177was not successful and the Cable continued to trade in the range between 1.4101 and 1.4177. At the time of writing, the pair is holding above the support zone at 1.4101, which will most likely hold. Only a successful breach could strengthen the negative expectations and lead to future losses for the GBP against the USD, leading to a move towards the levels at 1.4019. Better-than -expected data for the claimant count change (Tuesday; 06:00 GMT) and the CPI (Wednesday; 06:00 GMT) could help the bulls prevail and head the GBP/USD towards a new test of the resistance zone at 1.4177, followed by the level at 1.4209.

Gold price opened today’s trading with strong negativity to break the bullish channel’s support line and begins bearish correction for the rise that started from 1677.80 areas, as it begins testing 23.6% Fibonacci correction level at 1860.00, noting htat breaking this level will confirm extending the bearish wave to reach 1825.15 as a next negative target.

Therefore, the bearish bias will be suggested for today, taking into consideration that breaching 1880.00 will stop the current negative pressure and lead the price to regain the main bullish trend again.