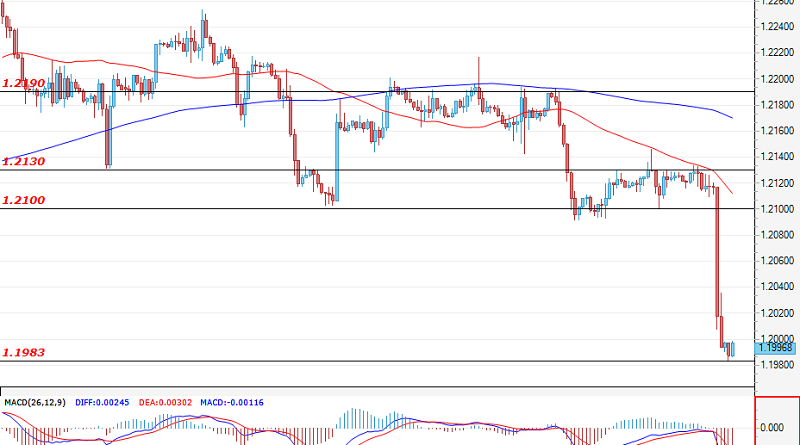 Yesterday’s meeting of the U.S. Federal Reserve raised the value of the dollar against the euro by about one figure. The pair managed to breach the key support at 1.2100 as the sell-off quickly reached the next support zone at around 1.1980. It is likely that the market will enter a pullback phase and its depth will confirm or refute the strength of the bears. The 1.1980 support comes from a higher time frame and is expected to withstand bearish pressure for the time being. The next such zone is 1.1880. The first resistance zone is 1.2100, followed by 1.2130. High volatility is also likely to continue today, with major events on the calendar being the European Consumer Price Index (09:00 GMT) and the initial jobless claims data for the United States (12:30 GMT).

The Ninja breached the local resistance at 110.11 and again reached the high from the beginning of April – 110.80. The market is expected to retrace some of the movement, but the support at 110.11 should not be violated. The resistance at 110.80 comes from the higher time frames and it will take more time for the market to break through. The realisation of such a scenario would open the way for the pair towards the next zone at around 111.70.

The Sterling broke out of the range that lasted for about a month.The support at around 1.3970 managed to stop the meltdown and the market is expected to retrace part of the movement. The breach of the support at 1.4080 turned out to be of key importance and the market can be considered to have reversed into a downtrend from the higher time frames as well. Exhaustion on part of the bulls during the pullback phase will give the bears a chance to breach 1.3970 and attack the next zone at around 1.3890.

Gold price achieved additional decline yesterday, as it broke 1825.15 level and approached the extended target at 1800.00, showing bullish bias by today’s open to test the first level that turns into resistance now, waiting to rebound bearishly to resume the correctional bearish track, affected by the completion of the doube top pattern that its signs appear on the chart, noting that breaking 1800.00 will push the price to 1770.00 as a next negative target.

Therefore, the bearish trend will remain suggested in the upcoming sessions, noting that breaching 1825.15 and holding above it will stop the negative pressure and lead the price to start recovery attempts that target testing 1860.00 areas initially.