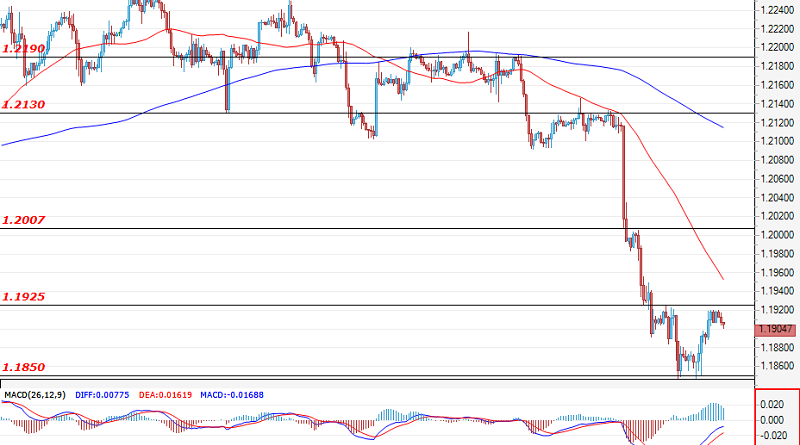 During the last trading session, the single European currency managed to recover a bit of its recent losses against the U.S. dollar, but the upward move was limited by the resistance zone at 1.1925. This can be considered a short-term correction happening shortly before the bears are to re-enter the market. However, before the market sentiment turns negative, the resistance level at 1.1850 needs to be successfully breached. Only in this case can a continuation of the downward movement – towards the next support at 1.1760 – can be expected. In case the pair violates the resistance at 1.1925, the EUR/USD might gain just enough momentum to test the resistance at 1.2007. Before either of these scenarios materialises, the pair could form a range between 1.1850 – 1.1925. Today, investors’ attention will be focused on the data on the existing home sales for the U.S. (14:00 GMT) and Jerome Powell’s testimony scheduled for 18:00 GMT.

The USD/JPY appears to be losing momentum after the breach of the resistance at 110.11, but it is still too early to consider the development of a bearish scenario.. At the time of writing the analysis, the sentiment is rather positive and a move towards the resistance at 110.80 is likely. However, if the support at 110.11 fails, the sell-off will probably deepen towards the support levels at 109.81 and 109.37.

The sterling has started the week with gains against the U.S. dollar and reached the important resistance at 1.3942, but the bears are holding their ground and, at the time of writing this analysis, there is a slight decline, which suggests that this upward impulse is, in fact, a short-term correction. If the bears prevail and breach the level of 1.3892, the pair will most likely head towards the support at 1.3800 and only a successful breach of this level will suggest a deeper sell-off. In the opposite direction, the first resistance ahead of the bulls lies at 1.3942.

Gold price trades positively since yesterday, approaching to test the key resistance 1800.00, accompanied by stochastic loss to the positive momentum, while the EMA50 forms continuous negative pressure against the price.

Therefore, these factors encourage us to continue suggesting the bearish trend, which its targets begin by breaking 1770.00 to rally towards 1734.10 as a next main station, noting that breaching 1800.00 will lead the price to achieve additional gains that reach 1825.15 followed by 1860.00.