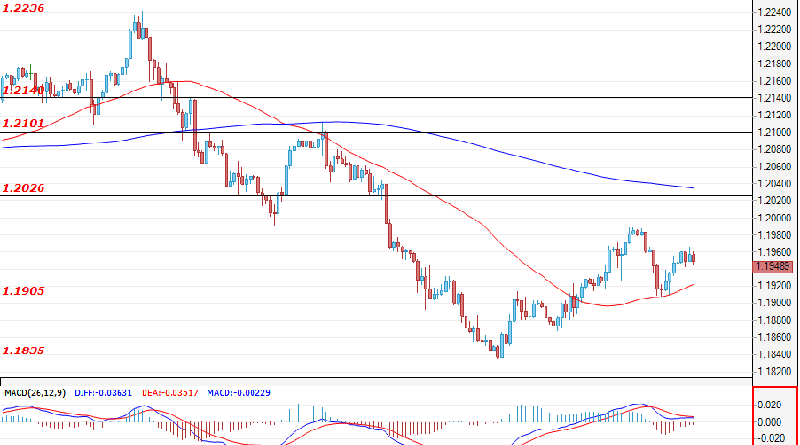 On Friday, the pair tested the support at around 1.1905 and its breach was successfully confirmed. In the early hours of today’s trading session, prices are consolidating around last week’s close. Expectations are rather optimistic – for a new rally towards the resistance at around 1.2026. The consolidation could continue throughout the day, so a more solid support could form at around 1.1905. Such a scenario would enhance the bullish sentiment for a ride towards 1.2100. Bulls, however, are not out of the woods just yet, so a new test of the main support at 1.1835 remains possible. The headline event for this week is the FOMC meeting, which will be held this Wednesday at 18:00 GMT. Investors will closely monitor Fed Chairman Jerome Powell’s speech after the meeting, which should shed more light on the economic outlook, the inflationary pressure and, most of all, the bank’s decision on whether it will continue with the QE purchases.

The market trend has entered a pullback phase after the bulls got limited by the resistance at 109.20. The pair managed to form its first solid support in the zone at around 108.30-108.40. In the early hours of today, prices are hovering just below the 109.20 highs. This resistance is coming from the higher time frames and it might take longer for the market to develop a pullback before it could take that level out. If that zone is breached, we can expect further gains towards 110.80. The first local support for the buyers is found at around 108.85. In an alternative scenario where 108.32 fails to hold the market, bears would have a chance to test the starting point of the move at around 106.90-107.00.

The Cable confirmed the support at 1.3856 and the bulls could try and take over the resistance at 1.4000 once again. A breach of that level would be an early signal foreshadowing the end of the pullback phase, as well as a fresh rally aiming at the 1.4180 highs. The daily support for the buyers remains the 1.3856-1.3800 zone. This week is expected to be volatile due to the U.S.-related news already mentioned in theEUR/USD analysis, as well as due to the Bank of England’s upcoming interest rate decision this Thursday at 12:00 GMT.

Therefore, the bearish trend scenario will remain valid and active for the upcoming sessions conditioned by the price stability below 1735.00, reminding you that our main waited targets begin at 1692.00 and extend to 1660.00 after breaking the previous level.