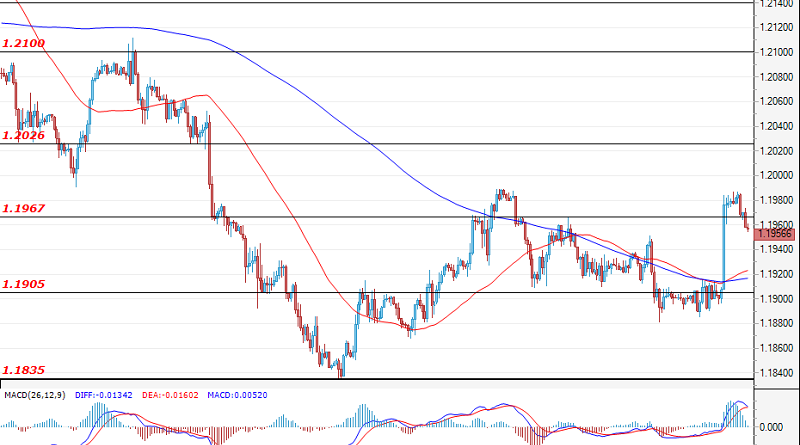 The currency pair failed to stay permanently below the support zone at 1.1905 and, as a result, the euro rose against the dollar, reaching 1.1986 in the last hours of yesterday’s trading session. Today’s session started with a correction, but forecasts are for a continuation of the upward movement. The first important support is the one at 1.1905, and the key resistance at 1.2026. Today, the attention of investors will be attracted by the data on the initial jobless claims in the United States (13:30 GMT).

The currency pair has been trading in a range over the last few trading sessions and this may be a sign that the uptrend is over. The yen is projected to fall and rise. The first important support is at 108.32 and, if it gets broken, we can expect more serious declines. The key resistance is the level at 109.19.

The currency pair tested the key support at 1.3856, failed to break it and the pound rose again against the dollar. The forecasts are for the continuation of the upward trend and the test of the important resistance and psychological level at 1.4000, followed by the test of the local peak at 1.4240. The key support remains the mentioned level at 1.3856. Today, investors will follow the decision on the Bank of England interest rate decision (12:00 GMT).

Gold price continued to rise to breach the bearish channel’s resistance and settles above it, to confirm the activation of the bullish trend scenario on the intraday and short-term basis, on its way to visit 1765.00 as a first main target.

Therefore, the bullish bias will be expected for today, supported by the EMA50, taking into consideration that breaking 1742.00 followed by 1739.50 levels will stop the suggested rise and press on the price to return to the bearish track again.