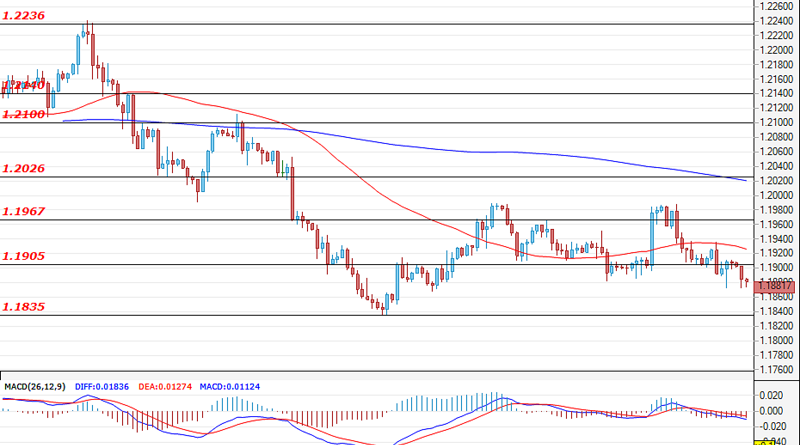 The euro started the week with new losses and, during the early hours of today’s trading, the pair has been holding positions under the important levelat 1.1905. A confirmation of the breach at the mentioned level would easily lead to a test of the next support zone at 1.1835 and would strengthen the negative expectations for the future path of the currency pair. If the bulls re-enter the market, a rally towards the resistance level at 1.1967 is possible, but only a successful breach of the next target at 1.2026 could lead to a change in the current market sentiment. This week, investors` attention will be focused on Jerome Powell’s speech (today; 13:00 GMT), the GDP data and the initial jobless claims data for the U.S. (Thursday; 12:30 GMT).

The bulls did not gain enough momentum to successfully violate the resistance zone at 109.19 and, during the early hours of today’s trading, the currency pair has been hovering around the support zone at 108.85. A breach here could easily lead to a test of the next target at 108.32, a violation of which could deepen the correction and result in a move towards the support at 106.92. If the buyers prevail, only a successful breach of the resistance zone at 109.20 could lead to a continuation of the rally targeting the levels at around 109.80.

The Cable lost some ground and, at the time of writing, the pair is holding positions around the current level of 1.3841. A test of the support zone at 1.3797 is a possible scenario and, if successful, could lead to new losses for the GBP against the USD and strengthen the negative expectations for the path of the currency pair. If the mentioned level holds off the bearish attack, the first resistance zone can be found at 1.3856. Only a breach of the next target at 1.3990, however, could lead to a rally towards 1.4094 and, possibly, 1.4179.

Gold price confirmed breaching 1739.50 level after closing the daily candlestick above it, and despite today’s negative open, the price begins to rebound bullishly after leaning on the intraday bullish channel’s support line, which support the continuation of the positive trading in the upcoming period.

Therefore, the bullish trend will be expected for today, and the first target is located at 1765.00, noting that breaking 1734.00 will stop the expected rise and press on the price to return to the main bearish track again.