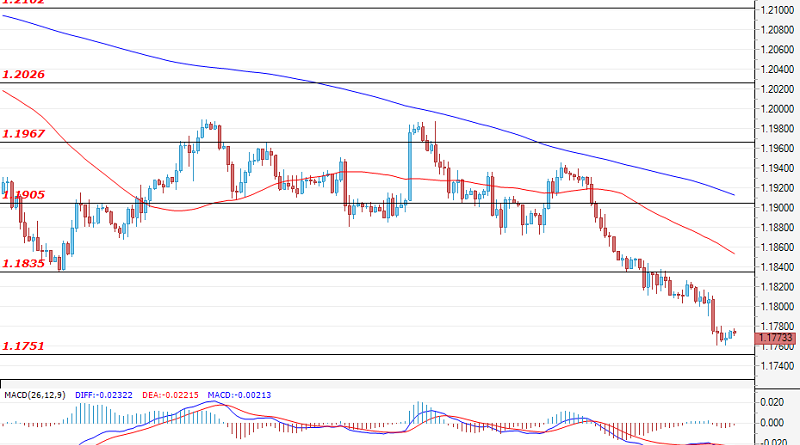 After the EUR/USD violated the important support level of 1.1835, the common European currency continues to lose ground against the dollar and, at the time of writing the analysis, the pair is headed for a test of the support at 1.1751. In case this support level is breached, then the sell-off would gain momentum and we would probably witness prices dip below 1.1700. If the support at 1.1751 manages to resist the sellers’ pressure, a corrective move could occur, taking the price back to a test of 1.1835. Today, investors’ attention will be drawn to the data on the Michigan Consumer Sentiment (14:00 GMT).

The currency pair is headed for a test at the upper border of the 108.32-109.20 range, in which it has been trading for the last couple of days. A successful breach at 109.20 would signal a renewal of the uptrend and we could witness the pair rising above 110.00. Alternatively, a failed attempt at 109.20 would push the pair towards the lower border of the range at 108.32.

The depreciation of the sterling against the dollar was stopped by the support level of 1.3671 and the pair entered a corrective phase, with its first target being 1.3797. If this resistance is violated, then the pair would test the next one at 1.3856. In the negative direction, the main support levels are located at 1.3671 and at 1.3640.

Gold price’s recent trade are confined within sideways track between 1740.00 resistance and 1720.00 support, facing contradiction between the technical indicators, which makes us suggest the domination of the sideways move until the price confirms surpassing one of the mentioned levels followed by determining the next destination clearly.

Note that breaking the mentioned support will press on the price to return to the main bearish track and achieve negative targets that start at 1700.00 followed by 1692.00, while breaching the resistance represents the key to rally to recover and achieve gains that reach 1765.00 initially.