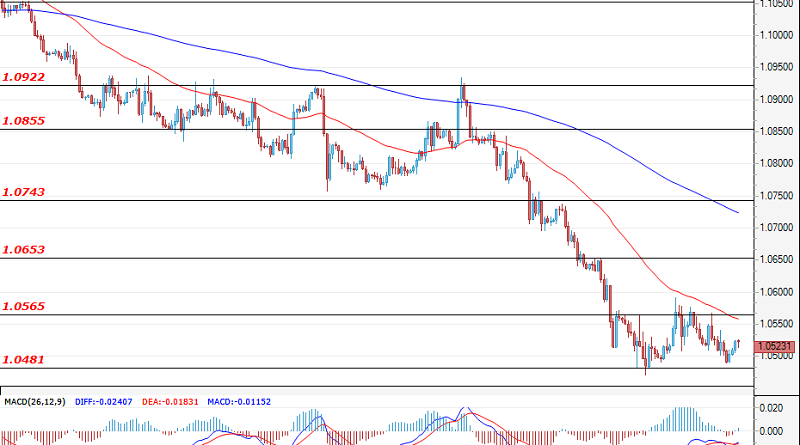 During yesterday’s trading session, the currency pair did not undergo drastic changes and we witnessed a slight decline, which the bulls limited above the key support level at 1.0481. With a possible predominance of the buyers and a successful breach of the first resistance at 1.0565, it is possible to witness an attack on the next significant level at 1.0653. Today, there is no planned economic news and statements that are expected to affect the move of the currency pair, so the main driving force remains the complicated economic situation.

With the Ninja, we saw a slight decline, which remained limited above the support level at 128.87. A short correction followed, with the price consolidating just below the resistance level at 130.25 at the time of writing. A possible bull predominance and a breach of the mentioned resistance would strengthen the positive sentiment of the investors. On the other hand, if the bears manage to establish themselves on the market, then their first significant support would be the level at 128.87.

Yesterday started promising for the bulls, and during the early hours of the trading session, they managed to overcome the first resistance at 1.2500. Subsequently, their hopes for further growth were overshadowed by the failure to breach the key resistance at 1.2600 and the subsequent decline towards 1.2500 – a level that already plays the role of support. Therefore, the most likely scenario for today is for a consolidation around the current level.

Gold price provided clear negative trades yesterday after confirming breaking 1925.35 level, to approach our waited target at 1850.00, oraganized inside the bearish channel that appears on the chart, which supports the chances of achieving more expected decline in the upcoming period, noting that breaking the mentioned level will extend the bearish wave to reach 1820.00 followed by 1780.00 as next main stations.

Therefore, we expect to witness more decline on the intraday basis unless the price rallied to breach 1890.00 and hold above it.