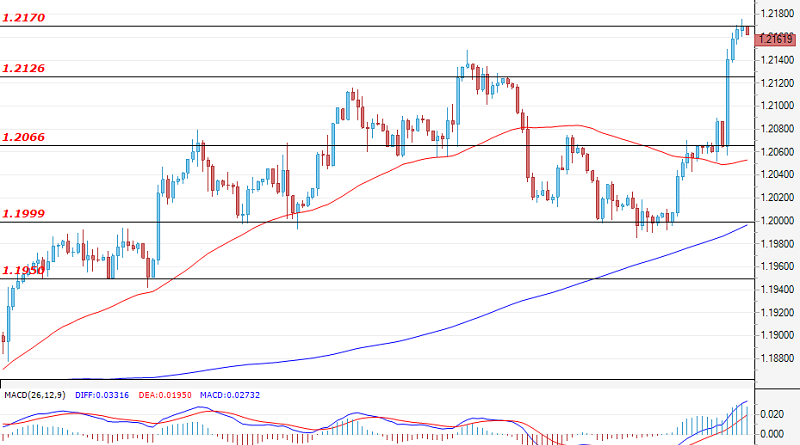 The bulls prevailed during Friday’s trading session and the successful breach of the resistance zone at 1.2126 led to new gains for the EUR against the USD. At the time of writing, the price is sitting just below the next important resistance zone at 1.2170, which is coming from the higher time frames and so a new test of the mentioned level is a highly probable scenario. A breach of the mentioned level would easily lead to a continuation of the rally and would strengthen the positive expectations for the future path of the currency pair. If the bears enter the market, the corrective phase should be limited to the zone at 1.2126 (now acting as support) or 1.2066, if the sell-off continues past 1.2126. Important news for the traders this week is the expected U.S. unemployment change data (Thursday; 12:30 GMT) and the retail sales data (Friday; 12:30 GMT).

The drop was limited to around the support level at 108.48 and the USD/JPY regained some of its lost positions. During the early hours of today`s trading, the pair tested the zone at 108.76, which is now acting as a resistance. If the breach is confirmed, the bulls could easily pave the way for a test of the next target at 109.01. If the mentioned level at 108.76 ends the positive retracement, a new successful attack of the support at 108.48 could extend the losses of the USD against the JPY, thus nearing the zone at 108.20.

The GBP gained quite a bit of ground against the USD and the pair is successfully holding positions above the last resistance zone at 1.4005. If the bulls remain in control, the rally will most likely continue towards 1.4100 – a level which was last reached at the end of February. The first target for the bears can be found at the level of 1.4005, which is now acting as a support.. Only a successful breach of the support at 1.3860, however, could easily lead to a change in the current market sentiment.

Gold price succeeded to achieve our waited target at 1838.00 and settles there, starting today with new rise to hint heading to surpass this level and achieve more expected gains in the upcoming sessions, noting that the next target reaches 1765.00.

Therefore, we will continue to suggest the bullish trend on the intraday and short term basis, taking into consideration that failing to surpass 1838.00 followed by 1847.00 levels will stop the expected rise and press on the price to rebound bearishly to visit 1800.00 followed by 1785.00 areas mainly.