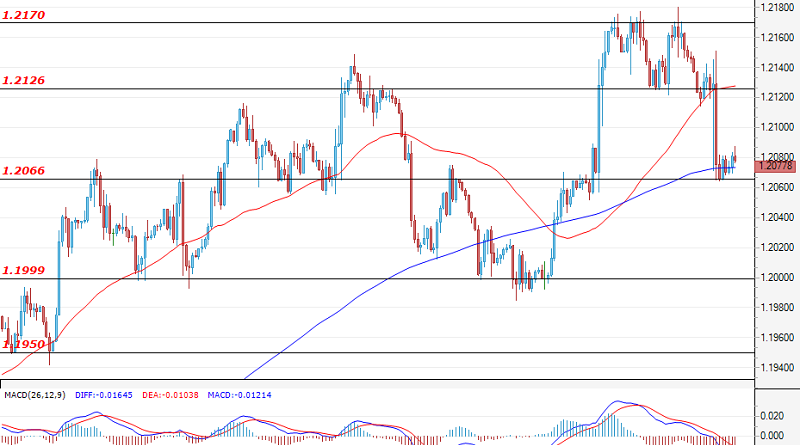 The depreciation of the single European currency against the U.S. dollar continued during yesterday’s trading session, but the sell-off was limited to the support level at 1.2066. l. The sentiment remains negative, with the next target for the currency pair being the significant support at 1.2000. In the positive direction, the main resistance lies at 1.2126. Today, investors will shift their attention towards the announcement of the initial jobless claims data for the U.S. (12:30 GMT), as well as the data on the producer price index for the U.S. (12:30 GMT).

The forecasts for the previous trading session were confirmed and we witnessed an increase with an uncompromising breach of the first resistance at 109.01. The event gave an additional boost to the bulls and directed the move of the currency pair towards the next significant resistance at 109.40, which was also easily overcome. The bears managed to limit the appreciation to just around the level of the local high at 109.68. It is possible that, during today’s trading session, we will witness a correction, which should be limited above the level of support at 109.01.

The currency pair failed to hold above the psychological resistance at 1.4100, despite previously trading slightly above it. This was followed by a depreciation of the pound down to the first significant support zone at 1.4000. If the bears manage to gain enough momentum and secure a successful breach of the mentioned support, the next goal for the Cable will be the level of 1.3913. Further volatility in the currency pair could be provoked by the announcement of the data mentioned in the EUR/USD analysis.

Gold price heads towards the support

Gold price confirmed breaking 1825.00 level after closing yesterday below it, which pushes the price to achieve more decline and head towards visiting the bullish channel’s support line at 1792.00 before attempting to resume the main bullish trend again.

Breaking 1813.00 will ease the mission of achieving the expected decline, while breaching 1828.00 represents the first positive key to resume the main positive scenario followed by achieving new gains that start at 1860.00 areas.